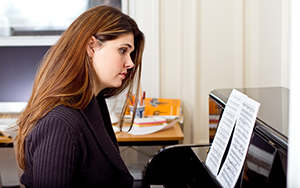 Ms. Bender studied voice at EMU before earning a graduate degree in voice from the Manhattan School of Music. She maintains an active career as a professional opera singer and has performed around the world. Some of her performances have included appearances with the Glydenbourne Festival Opera, Lyric Opera of Luxembourg, the Pittsburgh Opera, the BBC Smphony Orchestra, the Cincinnati Symphony, the National Symphony and the Minnesota Orchestra. 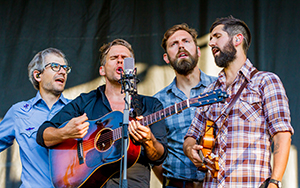 The Steel Wheels are a nationally recognized American Roots Music/Americana band and founders of the Red Wing Roots Music Festival. They maintain an active touring career and have released seven albums. Members of the band studied voice, participated in musical theater, orchestra, choir, and student rock bands while studying at EMU. 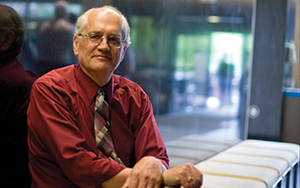 Dr. Gascho studied keyboard instruments at EMU before going on to earn graduate degrees in music from the Peabody Institute and The University of Maryland. He maintains an active career as a soloist, conductor, teacher and recording producer. Some of his performances have included appearances with the National Symphony at Carnegie Hall, the Kennedy Center, and with the Mark Morris Dance Group. Dr. Gascho is currently Assistant Professor of Music in Harpsichord and Historical Performance at the University of Michigan (Ann Arbor). 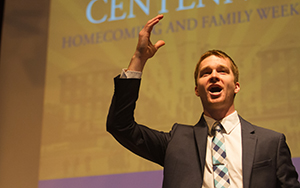 Dr. Bergey studied voice and conducting at EMU before going on to earn graduate degrees in music at James Madison University. Dr. Bergey is the conductor of the Rapidian Orchestra (Orange, VA), the director of Harrisonburg Sacred Arts and a board member of the Shenandoah Valley Bach Festival. Dr. Bergey is currently Assistant Professor of Music at Eastern Mennonite University and conducts the EMU Orchestra, University Choir, and Chamber Singers. 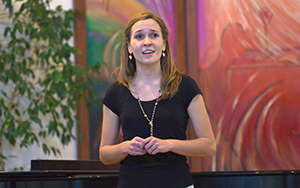 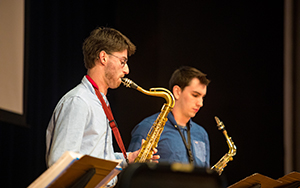 Mr. Horst participated in EMU Jazz ensembles as a saxophonist during his time at EMU. He currently performs with the Just Jazzin’ Jazz Band and is co-host of the Shifting Climates podcast along with fellow EMU music alum Michaela Mast (’18). 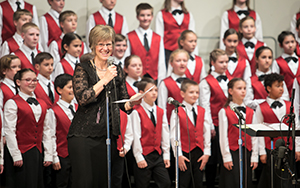 Dr. Hostetter studied music at EMU before going on to earn graduate degrees in choral conducting from James Madison University. She has served in leadership with the Virginia Chapter of the American Choral Directors Association and is currently the director of the nationally acclaimed Shenandoah Valley Children’s Choir.

The combination of being a double major and not declaring my music major until the end of my sophomore year made scheduling difficult, but the music faculty made it a priority to help me meet my requirements in four years. They moved classes around for me, allowed me to substitute equivalent courses, and were encouraging and patient throughout the whole process.
Sarah Sutter, 2016 music and biology graduate

I’ve also enjoyed the variety of music classes I’ve taken during my four years, such as Conducting, Listening to Film and Music Technology. I appreciate being exposed to the spectrum in which music can be applied—because there really is more to music than just history and theory.
Caitlin Holsapple, 2016 music interdisciplinary studies graduate

At EMU I appreciated the deep relationships I built with my music professors. They see you not only as a musician but as a person with varying interests. Highlights for me included teaching in the Preparatory Music Program and getting the opportunity to accompany a wide range of vocalists and instrumentalists.
Phillip Martin is a 2013 piano performance major from Mount Joy, Pennsylvania.

I’m thankful for the close-knit nature of the EMU music department, which allowed me to form friendships with many students and benefit from the direct support and guidance of each professor. I also appreciated the diverse performing opportunities I experienced, from solo and chamber settings to musicals, worship services, and events in the community.
Meg Smeltzer Miller is a 2013 violin performance major from Harrisonburg, Virginia.

Over my four years at EMU, I was given the opportunity to grow as a musician, a teacher, and a leader. The music department became my community very quickly as they were intentional about providing opportunities for department gatherings in Washington, D.C. and at various faculty homes. My professors made my studies meaningful in the way that they truly invested in me as a student. They saw my needs and worked with me to help me grow as a musician and future educator. Most importantly, however, are the relationships that formed between myself and my peers and the faculty. I am grateful for the time each faculty member invested in me and I always look forward to sharing those experiences with others.
Kelley Schroder is a 2013 music education graduate from Leesburg, VA

During my time at EMU, I became a much better musician. In my years here, I saw more growth and development than in the ten previous years combined. The faculty has a great reservoir of knowledge and a great passion for their craft that is readily evident.
Andrew Claassen is a 2012 interdisciplinary studies graduate with concentrations in guitar performance and recording technology.

At EMU, I’ve had many opportunities to perform and to have my compositions performed, and I’ve built strong personal and professional relationships with some of the music faculty. The Music Interdisciplinary Studies program worked out very well for me. Its versatility allowed me to transfer to EMU as a junior and still complete a double major in music and computer science on time.
Sam Kauffman is a 2012 interdisciplinary studies graduate with concentrations in composition and computer science.

The EMU Music Department offers a great experience to young and upcoming musicians. The faculty are unmatched in their quality and there is a great amount of freedom for students to experiment with and discover new forms of music and performance. My vocal performance major helped to shape me into the musician I am today. It has increased my appreciation of all types of music and will be something that I take with me for the rest of my life.
Stephen Kniss is a 2011 vocal performance graduate from Chicago, Ill.

My time at EMU was filled with many opportunities to develop as a musician and as a leader. I especially appreciate the chance to teach private lessons and groups in the preparatory program, as well as other leadership opportunities in conducting classes and small string ensembles. I enjoyed performing, solo and in groups, from orchestra to smaller chamber groups and even being part of other music student’s projects! EMU was a wonderful experience!
Kara is a 2008 music education graduate.

Music at EMU has taught me the importance of connecting with others. To me, this is one of the most valuable things to be learned in life. We’re not on this journey alone, but we must find concrete ways in which to react to others. Music, as they say, is the universal language. I have grown so much as a violinist.
Bebhinn is a 2009 music and violin performance graduate. .

Though the music program is small, I had many opportunities to perform and accompany and to not feel lost in a crowd of too many other pianists. I had great relationships with my professors and they’ve given me much individual attention in my studies. I will miss EMU and the friends that I’ve made here!
Jonathan Keener is a 2007 piano performance graduate and EMU honors student from Lancaster, PA

My EMU experience could be described in so many ways, both as a music major and a student at large. Most beneficial for me was the freedom to explore a wide variety of musical pathways, both within the required curriculum and beyond. Not only have I surprised myself by looking towards graduate school, but I have learned to play upright bass and jazz piano, to conduct, compose my own music, and many other things. I don’t think too many graduates of other schools get to finish with such an affirming experience of both professionalism and eclecticism.
Nathan Bontrager is a 2007 music graduate with concentrations in cello performance and music education. Nathan has a master’s degree in modern cello from the University of Maryland.

The performances I was able to participate in made a huge difference in my life, including touring with Chambers, singing The Messiah, being part of The Music Man, three opera scenes classes, and lots of noon recitals. All of these opportunities helped me grow and mature as a musician.
Bethany Blouse is a music education major from Stuarts Draft, VA

The beautiful campus and friendly people drew me to EMU. I love music, and hope to be performing somewhere or teaching on the college level when I graduate. Classes here are challenging, but the professors are very helpful and understanding. Most of my music classes only have five to 10 people in them and that means a lot of one on one time with the prof.
Michael Dezort, is a vocal performance graduate from Normalville, PA