VaCa student work in photography, digital media, art and videography has received attention from national and international media. The Washington Post covered our class documentary on the Kurdish community in Harrisonburg, and the BBC ran student photos from the documentary on their website.

Digital media grad Joel Landis interned at an advertising agency specializing in film trailers in Los Angeles. After graduation, he moved into a full-time role as video editor. He now creates film trailers for major motion pictures and is based on the West Coast.

Matthew Gillis, a photography major, interned for National Geographic Adventure in New York City, the D.C. United soccer team and Oregon’s Statesman Journal. He was the winner of an Associated Press Photo of the Month.

Steven Stauffer submitted his class photography portfolio to the Festival of the Photograph and was awarded a scholarship to study with National Geographic photographer Bill Allard for a week. Steven’s work was shown at the Paramount Theater in Charlottesville to an international audiencethat included some of the best known photographers in the world.

Art major Kari Martin’s work was exhibited in three shows in the region during her senior year, and her paintings were selected for a consortium student show at Bridgewater College. They were also the only student works accepted into an invitational show, “Red” at the Smith House Gallery. Additionally, Kari won an award for one of the paintings in the nearby Artful Dodger’s first juried show.

Our graduates are bringing their Visual and Communication Arts training to a variety of vocations.

Here are a few samples: 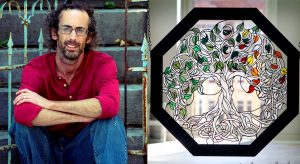 Zachary Nafziger ’01 is a full-time stained glass artist and owner of ZN Stained Glass. His working studios are located in Spitzer Art Center in Harrisonburg.

Artist Melinda Steffy ’03 is also executive director of LiveConnections, a non-profit in Philadelphia, PA, that inspires learning and builds community through collaborative music-making. 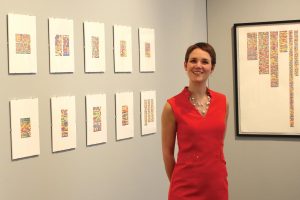 Michelle Lynn Mitchell is a photographer for the Virginia News Leader. She specializes in wildlife and animals.

Frank Ameka worked as a media designer for James Madison University. His photography has been published in Time Magazine.

Mary Yoder-Anderson is the publications coordinator for the American Shakespeare Center .

Todd Yoder is a self-employed illustrator. His work can be found at Todd Kenton Yoder Illustration.

Mark Fenton is a media specialist with Gravity Group in Harrisonburg.

Tiffany (Horst) Showalter is a photographer for Rosetta Stone , the creators of the leading language learning software.

Melanie Pritchard is a freelance artist/illustrator.

Katie (Rodriguez) Schmid and Amelia Schmid own a photography business, The Pinwheel Collective.

Jon Styer is a digital media specialist and lead designer at EMU.

EMU is not responsible for the content of external links. This information was updated in October 2015.