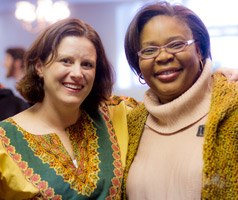 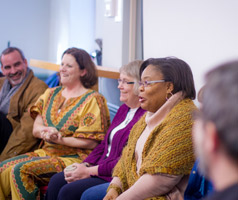 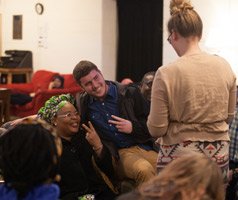 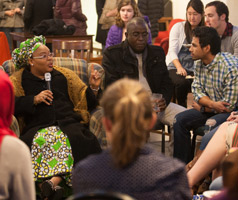 Leymah received the Nobel Prize for her work in organizing a peace movement to end the Second Liberian Civil War. She has become famous across the globe for mobilizing women.2 See videos from her events on campus during Homecoming and Family Weekend 2011, when she was named “Alumna of the Year.” While on campus she exhorted community members to consider how each could use his or her “personal tragedy to impact your community.”

Leymah spoke at EMU’s 2014 commencement. Her son, Joshua Mensah, was part of the 2014 graduating class. Gbowee has said that she chose EMU for her son because she wanted him to go to a Christian college that emphasizes community and peacebuilding. See local coverage of her address.

Gbowee spent the 2013-14 academic year as a Distinguished Fellow in Social Justice at Barnard College in New York. She is the founder and president of the Gbowee Peace Foundation Africa, which supports education and leadership development in Liberia, and a co-founder of both the Women Peace and Security Network Africa and the Ara Pacis Initiative, a global peacebuilding and reconciliation organization. She also serves as an Oxfam Global Ambassador, working on the international nonprofit’s campaigns against poverty and injustice, and as a board member of the Nobel Women’s Initiative and the PeaceJam Foundation.

Gbowee’s links to Mennonites began in 1998, when she received training in “trauma healing and reconciliation” and then worked at rehabilitating child soldiers.

The first trainings like this in Liberia were offered by Barry Hart, a Mennonite with trauma expertise who is now academic director of CJP, arrived in the early 1990s through US-based Mennonite Central Committee and Mennonite Mission Network.

Her journey from being a destitute and depressed mother of four to being an assertive peacebuilder began in the late 1990s when she received training in trauma healing and reconciliation from Lutheran church workers in Liberia during that country’s civil war. These workers had had been trained by Barry Hart, a Mennonite peace worker in Liberia in the early 1990s and now academic director of EMU’s Center for Justice and Peacebuilding (CJP).

Encouraged by close colleagues in West Africa who had been educated at CJP, Leymah first came to CJP in 2004 for its Summer Peacebuilding Institute and returned for training in Strategies in Trauma Awareness and Resilience (STAR) in 2005. In 2006-07, she was in residence at EMU as she finished her master’s degree in conflict transformation.

In her memoir, “Mighty Be Our Powers,” Leymah credits another Liberian, Sam Gbaydee Doe, who earned a master’s degree from CJP in 1998 – along with CJP professors Hizkias Assefa, John Paul Lederach, and Howard Zehr – with particularly influencing her journey to peacebuilding.

Leymah co-founded *Women, Peace and Security Network Africa in the spring of 2006, with a fellow SPI alumna*, Thelma Ekiyor, and a third woman, Ecoma Alaga, who previously worked for an organization founded by two CJP alumni, the West Africa Network for Peacebuilding.

A Leader of Women

She was the focus of the documentary “Pray the Devil Back to Hell,” which shows how women confronted then-Liberian President Charles Taylor with a demand for peace to end a bloody 14-year civil war.

Gbowee motivated Liberian women to lock arms, protest, and pray. The women in white, from various ethnic and religious groups, followed Taylor and his representatives throughout negotiations in Ghana until they had reached a peace agreement.3 Ultimately, Taylor resigned from office after a U.N. tribunal charged him with war crimes. He went into hiding for a time but is now on trial at The Hague in Netherlands on war crimes charges.

The efforts of the Liberian women ultimately led to the election of Ellen Johnson-Sirleaf, another of the three women jointly awarded the 2011 Noble Peace Prize, as Africa’s first female head of state.4 In November 2011 Leymah was appointed by President Sirleaf to lead Liberia’s new National Peace and Reconciliation Initiative.5

A Legacy is Born

Leymah Gbowee and her son Joshua Mensah, a 2014 EMU graduate

When Leymah was looking for a place that would offer her eldest son, Joshua Mensah, the kind of education she believed in, she sent him to the same college where her good friend and fellow Liberian, Sam Gbaydee Doe had earned his MA in conflict transformation and sent his eldest child, Samfee Doe, a 2011 EMU biology graduate.

It’s the same college where another friend and fellow peacebuilding graduate, Doreen Ruto of Kenya, sent her first-born son, Richie Bikko, a 2011 EMU graduate and star athlete who was a peacebuilding major and volunteer with Habitat for Humanity.

Leymah’s son Joshua, a 2014 graduate of EMU, joins Caleb Hinga, who followed his mother, Alice Warigia Hinga to the place where she was finishing up her own MA in conflict transformation.