A longstanding focus on sustainability and stewardship enables EMU to use almost half the amount of energy as most other institutions its size. That same focus helped our campus to be the first in Virginia to obtain LEED Gold standard on a building.

When construction ended in 2012, EMU’s LEED Gold-certified buildings were among just 123 such buildings on university campuses across the country. There was just one other LEED Gold building on any Virginia university campus, according to the U.S. Green Building Council.

Green features of the residence halls include the use of numerous recycled building materials, recycling of nearly all construction waste, high-efficiency lighting and plumbing fixtures, extensive natural lighting, low-VOC materials and an emphasis on locally sourced building materials.

Surrounding the buildings are landscaping with native plants that require no permanent irrigation system and “biorentention” beds to control storm water runoff.

Each room in the newest residence halls is equipped with a switch that automatically turns off the room’s heat or AC when the windows are open, allowing students to let in fresh air without wasting climate-controlled air from the inside. 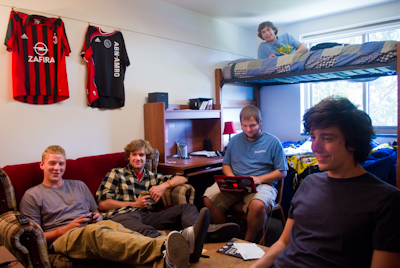 “Even though we’ve upgraded these dorms and made them fully climate controlled, our energy use across campus has gone down,” Eldon Kurtz, then the director of EMU’s physical plant, said in 2013.

Even though the residence hall new constructions and renovation added about 80,000 square feet of new air-conditioned space (none of the Woods dormitories were previously air-conditioned), the campus’s total electric and gas bill went down. That cost, which had averaged an inflation-adjusted $572,000 per year over the decade prior to dorm construction and renovation, fell to $519,000 for the fiscal year after construction ended and students moved in – a 9% reduction in campus-wide energy costs since the overhaul of the Woods quad.

The Troyer Group, an architecture firm based in Mishawaka, Indiana, designed all three buildings and worked with EMU to meet the stringent LEED standards.

Heating, cooling and powering buildings on campus consumed about 45,000 British thermal units (Btu) per square foot of building space – a common way of measuring energy use – over the course of the fiscal year after construction ended. That’s a 26% improvement from the previous decade, when EMU used a yearly average of 61,000 Btu per square foot across the entire campus. 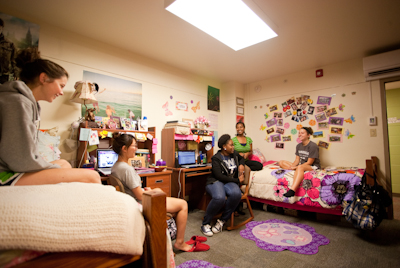 EMU uses just 55% – about half – the energy used by other institutions its size. In 2011, according to data from the Association of Physical Plant Administrators (APPA), EMU consumed about 49,000 Btu-per-square-foot on campus. The average that year for 38 American universities with enrollment between 1,000 and 2,000 students and that participated in the APPA survey was 89,000 Btu per square foot.

Because of several concurrent sustainability initiatives on campus, including the installation of a PV-solar array on the library roof, it is difficult to measure the precise impact of the dorms alone on EMU’s total energy use and cost during the noted years.