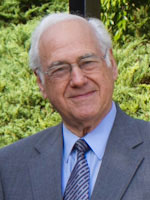 When he took office as president of Eastern Mennonite College at the age of 35 – the youngest president ever – Myron S. Augsburger was already a nationally recognized evangelical leader. Four years later he would be named by Time magazine as one of the five most influential “preachers of an active gospel” in America.

An EMC graduate, Augsburger earned master’s and doctoral degrees from Union Theological Seminary. He served as a pastor in Florida and Virginia and founded InterChurch Inc., conducting more then 50 community-wide crusades by the time he became EMC president. As a board member for the National Association of Evangelicals, he sought to extend the Anabaptist/Mennonite perspective in American church life.

A prolific writer, Augsburger’s books include a novel about Anabaptist leader Michael Sattler. It was titled Pilgrim Aflame and grew out of his doctoral dissertation.

As the new president of EMC, Augsburger was determined to turn what some saw as an insular school—90 percent of whose students were Mennonite—into a national player among Christian liberal arts colleges.

The two biggest building projects during the Augsburger years were the domed state-of-the-art (at the time) facility later named Suter Science Center, which opened in 1968, and the imposing building that later became Hartzler Library. It was completed in 1971 after a student-led fund campaign in late 1969. The campus-wide fundraising drive was viewed as miraculous, in that $113,000 was raised over four days, as was necessary for EMC to secure (or else to lose) federal government funds for the remainder of the library-construction budget..

Other building projects were the Roselawn (1967) and Oakwood (1969) residence halls, the Discipleship Center (1974) on the hill behind campus and a major 1975 renovation of the chapel-auditorium that was re-named Lehman Auditorium.

After 15 years of work to strengthen EMC&S, Augsburger decided to resign in 1980 to pursue other interests.

First he was a scholar in residence at Princeton Theological Seminary. Then he and his wife Esther moved to Washington, D.C., to start a church on Capitol Hill. In 1988 Augsburger became founding president of the Coalition of Christian Colleges and Universities, serving until retirement in 1995, when the couple returned to their home in Harrisonburg. Augsburger continues to travel widely for speaking engagements and to write books, which have surpassed 20.