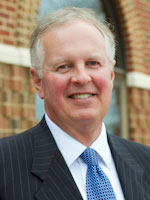 Although elected to serve as EMU president starting in the summer of 2003, Loren E. Swartzendruber did not actually take office until January 2004, a few weeks after his 54th birthday. He spent the intervening months in preparation for the presidency. Provost Beryl Brubaker was interim president from June to December.

Swartzendruber, a native of Iowa, served previously for nine years as president of Hesston College, a two-year Mennonite school in Kansas. Before that he was associate executive secretary of what was then Mennonite Board of Education.

With a B.S. in 1976 from EMC and an M.Div. from its seminary, Swartzendruber is an alumnus. He attended the University of Iowa School of Pharmacy before completing his bachelor’s degree at EMC, and ultimately earned a Doctor of Ministry degree from Northern Baptist Theological Seminary in 2000. He is an ordained minister in Mennonite Church USA.

Perhaps even more than his predecessors, Swartzendruber has worked hard to “sell” Mennonite higher education in general and EMU in particular. An accomplished speaker, he pursues an ambitious travel schedule that has taken him to nearly 130 churches.

Among Swartzendruber’s accomplishments are the successful re-accreditation process for another 10 years by the Southern Association of Colleges and Schools, filling key administrative positions with talented people, and leading the university through economic hard times while balancing the budget.

The biggest building project so far in the Swartzendruber years has been “Phase Two” of the University Commons project (completed in 2011) in which the old Student Center was transformed into a main stage theater, studio theater, art gallery, classrooms, advanced media lab, and expanded coffee shop.

Other projects include the replacement of Oakwood residence hall with Cedarwood and the renovation of two others—Maplewood and Elmwood. In 2012, Roselawn was renovated for use by the Intensive English Program and other departments. The next project—the most expensive in EMU’s history—will be the renovation and expansion of Suter Science Center.

As EMU nears its 100th anniversary in 2017, Swartzendruber can say that the school has grown from:

Reflections and Messages from President Swartzendruber

Other Writings and Addresses