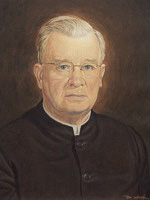 Two days after the death of A.D. Wenger, the EMS board appointed John L. Stauffer, a professor and churchman, as acting president. He was elected president 13 months later. At the age of 47 he was considered mature, experienced and capable.

Stauffer was a charter member of the EMS board, an ordained minister, a frequent Bible conference speaker in the East and a Bible instructor at the school for the past 17 years. He was also completing a term as moderator of Virginia Mennonite Conference.

Confidence in EMS, growing interest in education in the Mennonite Church and recovery from the Great Depression started an upward trend in enrollment. During Stauffer’s 13-year presidency, the student numbers increased from 159 to 442. The latter figure included 23 conscientious objectors who arrived on campus after World War II.

The school’s facilities—the Ad Building and South Annex plus a few smaller buildings—nearly burst at the seams as the enrollment grew. In early 1942 EMS completed the construction of the North Annex, balancing the South Annex architecturally – this complex of a central building and two annexes stood where the Campus Center is now situated. The library occupied the first floor of the new building. The next building project was a chapel-auditorium. Despite war-time shortages of steel, EMS completed the building in 1945, after nearly three years of work.

EMS gradually loosened its strict rules, shifting toward the Goshen College model. The changes came about as EMS and its students and alumni became more involved in the wider denomination and in the world around them.

Stauffer, along with longtime Dean C.K. Lehman and others, worked for years to achieve accreditation for EMS as a four-year college. This was finally accomplished in 1947, when the Virginia Board of Education approved the school’s request to grant Bachelor of Arts, Bachelor of Science and Bachelor of Religious Education degrees.

In the fall of 1947 the school officially became Eastern Mennonite College.

In 1948, Stauffer asked for and received a sabbatical leave, feeling that he had served his time and that he should step aside for a younger person with more formal education. He had also begun serving a two-year term as moderator of the Mennonite Church. The EMC board named Professor John R. Mumaw as acting president. Stauffer later resigned officially as president, effective at the end of 1949.

Stauffer served on the EMC faculty until 1957, when he retired after 39 years of service. He died two years later at age 71.