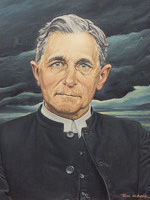 When the EMS board elected a new principal in February 1922, they brought to the foreground a founder who had twice declined to accept administrative positions. He was A.D. Wenger, a pastor and teacher from Denbigh, VA (now part of Newport News). He was 55.

Raised on a farm near Harrisonburg, Wenger traveled west as a young man, attending colleges in Missouri and Iowa, and teaching in public schools. Later he was ordained to the ministry in the Mennonite Church and became a pastor. He then worked in the new Mennonite Mission in Chicago, attended Moody Bible Institute and traveled throughout the denomination as an evangelist.

One of the first tasks that Wenger tackled as principal at EMS was what he called a “mountain of debt” that remained from the school’s start-up and construction of the Administration Building. He also initiated a number of campus improvements, including the South Annex to the Ad Building in 1926.

Wenger worked hard to maintain close ties between EMS and its church constituency, which were Virginia Mennonite Conference as well as other eastern conferences. It was important to the churches in Virginia and Pennsylvania, for instance, that EMS maintain strong standards of separation from the world.

Wenger encouraged EMS students to return to their home communities rather than “go to the city for an easy job and big pay.” He urged graduates to pursue occupations like school teaching, mission work and farming.

Throughout the 1920s and 1930s EMS strengthened its high school curriculum. (The “academy” name was dropped in 1927.) The two-year, college-level Bible school was also strengthened. By the end of the Wenger administration, EMS introduced a four-year college Bible program.

EMS also offered a junior college program to prepare students for regular vocations. This became the most popular program at the school. Teacher-education and pre-med majors were added in the 1920s. In 1930, the junior college achieved state accreditation—probably the greatest accomplishment of the Wenger years.

Wenger, whose title was changed to “president” in 1926, presided over a school hard hit by the Great Depression for most of the 1930s. Enrollment declined, financial contributions decreased and faculty positions were cut. Salaries, which were already low, were reduced.

Just as EMS appeared to have turned the corner in finances and enrollment, Wenger died suddenly in his home on Oct. 5, 1935. He was 67.