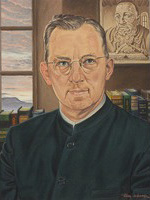 Taking office as acting president of the newly re-named Eastern Mennonite College in the fall of 1948, John R. Mumaw had spent more than half of his 44 years on campus—as student, staff member, campus pastor and professor in the fields of English, Bible and practical theology. Born in Ohio, he was the first alumnus to be chosen president.

Mumaw had graduated from Elizabethtown College (from which he received an honorary doctorate later), pursued graduate studies at the University of Virginia and earned a master’s degree from American Theological Seminary. He was an ordained minister.

Soon after being named president in 1950, however, Mumaw faced a challenge from a group of Virginia Mennonite Conference pastors who criticized liberalizing trends at EMC and the way that Mumaw was selected as president. Many of them had supported the candidacy of George R. Brunk Jr., a conservative Virginia pastor and evangelist. Mumaw survived the challenge, and Virginia Conference issued a vote of confidence.

Throughout the 1950s Mumaw led EMC in pursuit of a higher level of accreditation—regional accreditation by the Southern Association of Colleges and Schools. The college met most of the criteria but fell short in three areas—library holdings, faculty compensation and endowment funds.

EMC finally achieved regional accreditation in 1959. Mumaw observed that everyone was “grateful for the grace of God that was so evident at many times through the years of progress toward this goal.”

Enrollment during Mumaw’s 17 years as president increased 44 percent, from 475 to 843. The college and high school numbers, which were roughly equivalent at the beginning of his term, were 3-to-1 in favor of the college by the end. EMC was one of the first colleges in Virginia, a racially segregated southern state, to integrate (in 1948).

The two biggest building projects of the Mumaw years were the North Lawn residence for women (and campus dining hall), which took 10 years to complete (in 1958), and the Student Center (primarily a gymnasium), built in 1957. Other projects included two residences for men (Elmwood and Maplewood) in 1963.

During the Mumaw administration, the high school gradually evolved into a separate institution, acquiring its own building in 1964, and upper-level Bible courses turned into Eastern Mennonite Seminary—a name that was established in 1965.

In the early 1960s, Mumaw started talking about leaving the presidency, but he agreed to stay on until 1965. He continued on the EMC faculty and served terms as moderator of his denomination and of Virginia Conference. He also helped establish Pleasant View Homes for adults with developmental disabilities and served as founding pastor of Dayton Mennonite Church. Mumaw died in 1993 at age 89.