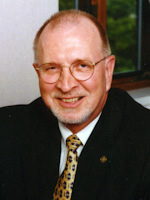 Like his immediate predecessor as EMC&S president, Joseph L. Lapp was a native of eastern Pennsylvania. But unlike all six of his predecessors, he was not an ordained minister. He was a lawyer by profession.

Lapp took office in July 1987 at age 43 after serving 12 years on the EMC&S board, chairing the board the last six years. A graduate of EMC and Chicago-Kent College of Law, he had worked as an attorney in the law firm of Souder, Rosenberger & Bricker in Souderton, PA

Fostering close ties with students, Lapp spent 10 days during his first year as president living in the Roselawn residence hall. When he opened chapel services with the greeting, “How are you?” students felt that he really wanted to know.

Lapp’s biggest accomplishments were starting four graduate programs in the 1990s and, as a result, ushering in the new name of Eastern Mennonite University in August 1994.

The four graduate programs were in counseling, conflict transformation, education and business. The program that is now called the Center for Justice and Peacebuilding has drawn international attention and boasts a Nobel Peace Prize winner among its graduates (Leymah Gbowee of Liberia, a 2007 MA in conflict transformation alumna).

Under Lapp’s leadership, EMU expanded its innovative cross-cultural program, involving every student at the undergraduate level, in graduate programs, in the seminary and in the Adult Degree Completion Program (which he helped start in 1994).

Among other building projects under Lapp’s leadership were a major new complex (including chapel) for Eastern Mennonite Seminary (1993), extensive renovations of the North Lawn residence hall and dining area (1995), Hillside Suites apartments (1995) and Augsburger Art Center (1997).

After 16 years as president, Lapp departed in 2003 to join the staff of Mennonite Foundation (now part of Everence), directing its Harrisonburg office. He also serves on the boards of MennoMedia and Eastern Mennonite School.