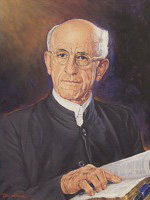 The newly named Eastern Mennonite School opened in September 1917 in a former retreat center—Assembly Park—at the edge of the current campus. The school was founded as a conservative alternative to Goshen College in Indiana and other Mennonite schools in the Midwest and West. At opening time, the school’s board was still looking for a president, or principal, as they called it. Board chair A.G. Heishman was filling in temporarily.

Later in the month, the board hired J.B. Smith, who had recently moved from Hesston, Kan., to Elida, Ohio, to start a Bible school. He agreed to set aside his dream, at least for a while, to come to Harrisonburg. When Smith and his family arrived by train on Oct. 9, he found that several students had been waiting almost two weeks to start their studies. The next morning he directed the first registration. Classes started on Oct. 15.

A native of Ontario, Smith came to the U.S. to earn undergraduate and graduate degrees at Ohio Northern University, Oskaloosa College and Temple University. He was about to enter Harvard University when he was recruited to be a Mennonite pastor and later a teacher at Hesston Academy and Bible School. He was 47 when he arrived in Virginia.

EMS started as an academy (high school) but soon added a college-level Bible school, an annual special Bible term and a Bible correspondence program. The commonwealth of Virginia accredited the academy in 1921. Smith taught a number of courses, and students loved and admired him.

The main building in Assembly Park—an old former hotel—was crumbling. In early 1919 the EMS board purchased a farm adjacent to Assembly Park and began planning and raising funds for what would become the Administration Building on the site of what is now the Campus Center. The new building opened after Christmas vacation, in early January 1920.

Smith abruptly resigned in January 1922 in a dispute with George R. Brunk, a Virginia church leader and vice-chair of the EMS board. Brunk and others felt strongly that Mennonite churches should maintain their a cappella singing tradition by banning musical instruments in the church as well as in the home. Smith did not agree that instruments should be banned in the home, and he and his wife had recently purchased a piano.

Smith stayed at EMS until the end of the academic year. He then returned with his family to Ohio, where he served as a pastor and worked on two major books—Greek-English Concordance of the New Testament and A Revelation of Jesus Christ. He died at his desk in 1951 at age 81.