CoachLink was a three-year pilot program made possible by the Austin Frazier Memorial Fund. The program was first announced in July 2010. Due to its tremendous success, EMU has continued to fund the program.

Below is Austin’s obituary, written by his parents, Bibb and Dolly Frazier. 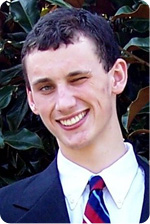 Our son, Austin Betts Frazier, died Wednesday, Oct. 7, 2009, at his grandparent’s home. He succumbed to a quiet, insidious disease: Bi-Polar disorder. Austin suffered valiantly from the ravages of this physically transparent illness since early adolescence. Bi-Polar is incurable and as deadly as cancer or heart disease. It is a disease of the mind and one’s mental outlook.

Austin is survived by his parents; his brother, Cyril Sease Frazier; and his beloved little sister, Janie Rosemary Frazier; his grandfather, Dr. James R. Sease; and many loving aunts, uncles, and cousins from both sides of our family. He was preceded in death by his maternal grandmother, Janie Tune Sease, and his paternal grandparents, Robert Y. and Linda Betts Frazier, all of Harrisonburg, VA 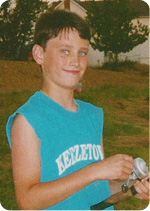 Austin graduated from Harrisonburg Baptist Pre-School, Blue Ridge Christian School, Keezletown Elementary, Montevideo MS, St. Anne’s-Belfield School and Blue Ridge Community College. He was so proud to be a junior at James Madison University with a major in psychology.

He believed in the Lord and the redeeming grace to be found in Heaven.

Austin’s loss leaves a hole in our life that cannot be filled. But we are comforted knowing he’s with Grandma, Papa, “Mom,” and Aunt Carla, now – and with a perfect body and healthy mind.