The results are in! 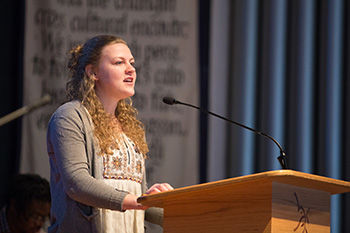 This year's contestants are 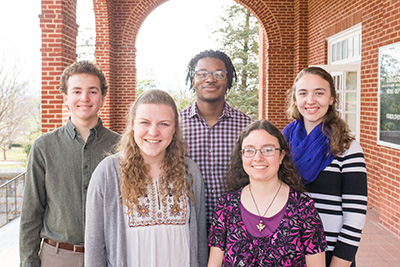 Hear the speeches through EMU Podcast.

The annual C. Henry Smith Peace Oratorical Contest, established in 1974 by the directors of the C. Henry Smith Trust, offers students an opportunity to discuss peacebuilding and social justice issues on campus. The intercollegiate competition is administered by the Peace and Justice Ministries of Mennonite Central Committee (MCC). Undergraduate students from every Mennonite and Brethren in Christ college in North America are eligible to participate.

C. Henry Smith was an American Mennonite historian and professor at Mennonite colleges and the University of Chicago. Overall, he taught history for nearly 50 years at the collegiate level. 1 He is well-known for his numerous books on Mennonite history and his particular attention to the peace commitments of the Mennonite tradition.

EMU has participated in the event since 2003, with EMU students winning the grand prize at the bi-national level in 2003, 2004, 2007, 2009 and 2011. The contest is sponsored by EMU Bible, religion and theology, language and literature, and peacebuilding and development programs.

Confession of Faith in a Mennonite Perspective, Article 22
And No One Shall Make Them Afraid – Mennonite Church USA Statement
Fellowship of Reconciliation web site
Peace & Justice Support Network web site

2017 Hannah Mack-Boll, What is your intention?

2016 Bethany Chupp, Standing at the Door

2013 Emily Harnish, Lessons from the Hymnal in an Election Season. Also bi-national 3rd.

2011 Jessica Sarriot, Hold on, Together. Also the bi-national winner.

2005 Sharon Kniss, Engaging the Terrorists: A Discourse on Living with the Other

2004 Jeremy Yoder, Flooding Isengard: Why a Peace Church should be a Green Church. Also the bi-national winner.