SASS will host a book study this fall, which will meet several times before the October 23 lecture by visiting scholar Holmes Rolston. 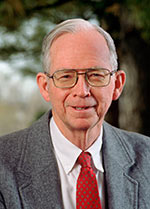 Holmes Rolston is professor of philosophy at Colorado State University. He has written seven books, acclaimed in critical notice in both professional journals and the national press. The more recent are A New Environmental Ethics: The Next Millennium for Life on Earth and Three Big Bangs. He has written chapters in 80 other books and penned over 100 articles. Rolston was awarded the Templeton Prize in Religion in 2003 and the Mendel Medal by Villanova University in 2005. He delivered the Gifford Lectures, University of Edinburgh, 1997/1998. Rolston was distinguished lecturer at the 28th Nobel Conference, 1992, at Gustavus Adolphus College, Minnesota, authorized by the Nobel Foundation, Stockholm.

At the primordial big bang, matter-energy appears, with the remarkable capacity to generate heavier elements and complexity. Life explodes on Earth, with DNA discovering, storing, and transferring information, escalating biodiversity and biocomplexity. The human genius is radically novel, mind explodes, hyper-immensely complex. Ideas pass cumulatively from mind to mind. Those at the center of complex caring intelligence wonder: Is there sacred Logos in, with, and such breakthrough creativity?

Dr. Richard Beck, professor and chair of psychology at Abilene Christian University, speaks on “The Will to Embrace: In Search of Christian Hospitality”

Study group: “Towards Secular Language With the Scope of Religious Language”

“SuperCooperators: Altruism, Evolution, and Why We Need Each Other to Succeed” by Martin Nowak and Roger Highfield

“Who made the Moon? A Father Explores How Faith and Science Agree” by Sigmund Brouwer, who led a university chapel service on “Is Genesis a Fence Barrier to the Cross” and provided an additional evening presentation in March 2012. His messages focused on recent findings on why young Christians leave the church and why understanding our origins – and Genesis – is so crucial to faith.