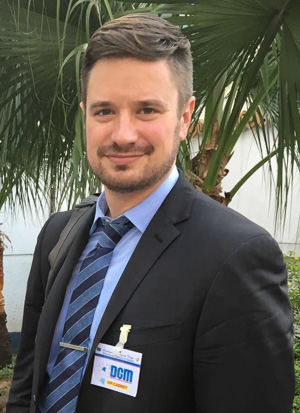 Michael J. (MJ) Sharp ’05 took to heart EMU’s mission to serve and lead in a global context. His work with Mennonite Central Committee (MCC) and the United Nations took him all over the world, building bridges between people in conflict as he sought justice and walked humbly with God.

On March 12, 2017, MJ was ambushed and murdered by unknown assailants in the Democratic Republic of Congo. As a UN expert on armed groups, he was on his way to meet with leaders of a new militia group in central DRC. His UN colleague Zaida Catalán of Sweden was also killed. They were seeking to better understand the militia’s structure, support networks, recruitment and use of child soldiers, and use of magic.

MJ majored in history and minored in German at EMU and went on to earn a master’s degree in peace studies and conflict resolution from Phillips University, Marburg, Germany.

MJ had previously worked for MCC as Eastern Congo coordinator, collaborating with the Congolese Protestant Council of Churches’ peace and reconciliation program to convince rebel fighters to lay down their weapons and return home.

To honor his memory, MJ’s family (parents John and Michele Miller Sharp, and sisters Erin and Laura), together with extended family and friends, set the goal of raising at least $50,000 to endow a scholarship in MJ’s name. As of June 30, 2021 the scholarship is valued at $265,000.  The scholarship provides need-based aid to graduate students at EMU’s Center for Justice and Peacebuilding with priority given to students from the Democratic Republic of Congo. We hope the scholarship will soon reach $500,000 in total value.

Friend and former classmate Kevin Ressler ’07 memorialized MJ as “a man who chose to go into dangerous places without a weapon to make safer communities for strangers, for people he did not know.”

History professor Mark Sawin remembers MJ as a student who “sought justice” in his academic work and his reporting for the student newspaper. “He was a model EMU student and a model human being. The world is a better place because he lived the kind of life that led to his death.”

Classmate Ben Wideman ’04, wrote, “Even back in college it was clear that MJ would be a person who would head out to save the world, creatively working at global solutions wherever he could and in whatever space he found himself. …His wit, wisdom, and humor were a gift to those who knew him well, and even though we only connected for a short time it feels like a gift to have those moments.”

“Many peacebuilders live with the keen awareness that their work involves taking risks,” said J. Daryl Byler, executive director of EMU’s Center for Justice and Peacebuilding. “In this tight-knit community, we grieve the loss of every peacebuilder, whether they were trained at CJP or, as in Michael’s case, came to peacebuilding as a natural outgrowth of his faith, his Anabaptist
education and his passion for social justice.”

All of MJ’s classmates, friends, church family, colleagues from the Military Counseling Network, the United Nations, Mennonite Central Committee and others are invited to contribute to this fund as a way of keeping MJ’s legacy alive. The scholarship will perpetuate the inspiration of MJ’s life, passing on his commitment to bridge building and peacemaking to other students, particularly those from the Democratic Republic of Congo.

You are invited to consider a one-time, tax-deductible gift or multi-year commitment to this scholarship. You can make your gift via check, a secure online form, or a transfer of securities.

Call the EMU Development Office for more information or assistance at 800-368-3383. Checks may be mailed to EMU Office of Development, 1200 Park Road, Harrisonburg VA 22802