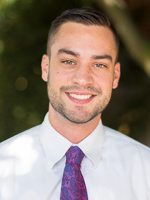 Originally from Durham, North Carolina, Phil graduated from Eastern Mennonite University in 2011. Phil began his work in admissions after earning a B.S. in Business Administration, and he worked primarily with prospective students from NC and VA, including Harrisonburg city and Rockingham county.

In 2016, Phil earned an MBA graduate degree from EMU. At that time, he began serving as the Associate Director of Admissions and eventually, Director of Recruitment Marketing.

In 2020, Phil moved into an Executive Marketing role at Keim in Millersburg, Ohio. He stayed on as an Adjunct Faculty Instructor in the Business & Leadership Department.