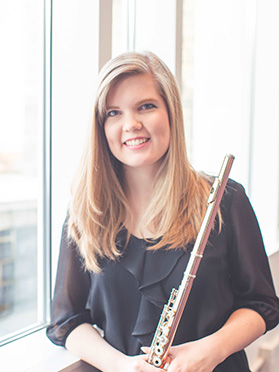 Originally from Jonesboro, GA, Lydia Carroll serves on the music faculty at Eastern Mennonite University, James Madison University, and Southern Virginia University. She is active as a flutist and private teacher in Harrisonburg, VA, and has also built private studios in Georgia at the Columbus School of Music and Dance as well as in the greater Atlanta area.

Lydia holds a Bachelor of Music degree in flute performance from Bob Jones University, a Master of Music degree and Artist Diploma in flute performance from the Schwob School of Music at Columbus State University, and a Doctor of Musical Arts degree in flute performance, pedagogy, and literature from James Madison University. She has performed with ensembles at Carnegie Hall as well as Barcelona, Spain, where she was a concerto soloist at the Costa Brava International Music Festival. Lydia was a winner of the 2019 National Flute Association's Masterclass Performer's Competition, a finalist in the 2014 MasterWorks Festival Concerto Competition, and a prize winner of the 2013 Atlanta Flute Club’s Young Artist Competition. A winner of the 2014 Schwob School of Music Concerto Competition, she has performed as soloist with the Columbus State University Philharmonic as well as the Columbus State University Wind Ensemble. In 2017, Lydia was awarded a grant from the Friends of Flutes Foundation to perform in masterclasses at the Iowa Flute Intensive and held a summer position at Interlochen Arts Camp. Her primary flute teachers include Beth Chandler, Andrée Martin, Amanda Barrett, and Catherine Bull.