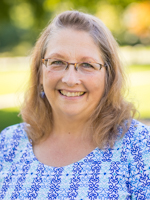 Lori graduated in 1981 from EMU with a degree in Early Childhood Education. She taught Kindergarten at Elkton Elementary School from 1981-1984. A move to Iowa City came in 1984 where her husband attended the University of Iowa for 4 years. They then moved to Decorah, IA, for an additional 14 years. By this time, they had 3 beautiful daughters! Lori stayed home raising them during most of those years. During the last four years in Decorah, Lori worked at Luther College with a program which came from a grant from the 3M Company. She and her family moved back to the Shenandoah Valley in 2002 and she began working at EMU with The Lilly Project in August of that year.