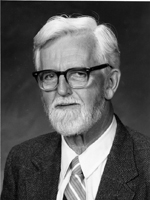 Dr. Horst taught a variety of history courses during his 28 years on the EMU faculty. Most of his graduate studies were at the University of Virginia, and his specialty was the Civil War era in Virginia. He wrote the ground-breaking Mennonites in the Confederacy in 1967 and co-authored Conscience in Crisis: Mennonites and Other Peace Churches, 1739-1789.

In retirement, Horst wrote Education for Manhood: The Education of Blacks in Virginia During the Civil War and The Fire of Liberty in Their Hearts: The Diary of Jacob E. Yoder of the Freedmen's Bureau School, Lynchburg, Virginia, 1866-1870. In 2004 he co-authored a book with former student Edsel Burdge, The Mennonites of Franklin County, Pennsylvania, and Washington County, Maryland, 1730-1970.