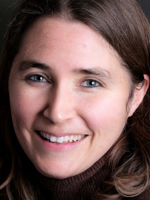 Janelle Myers-Benner completed undergraduate studies in justice, peace and conflict studies, with minors in Spanish and psychology, at EMU in April 2001. She began working part-time at CJP in 1999 while finishing her B.A. degree. Her life and learning has also been deeply impacted by her childhood years in Jackson, MS and time spent volunteering in Immokalee, Florida and Santa Cruz, Bolivia.

Since 2005 she has been putting roots down in Keezletown, VA on a 6 acre homestead (Tangly Woods) with her husband, Jason, and their three daughters (Kali, Alida, Terah) and the memories of their fourth daughter, Nora, who died in 2008. They are focused on learning to gain their dietary needs from the soil and selecting and breeding animal and plant strains that are well suited to those needs in that place. This is very connected with their desire to find a more just way of living. When she is not working for CJP, she can probably be found in one of their gardens, tending animals or in the kitchen making cheese or working on some other food preparation/preservation project.