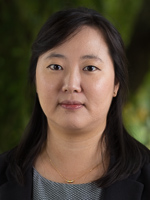 Ji Eun Kim is Assistant Professor in Political Studies, and she teaches courses on international politics, human rights, political reconciliation, and East Asian security. Her research lies at the intersection of International Relations, Comparative Politics, and Peace Studies, and her areas of specialization include transitional justice processes after large-scale political violence and international institutions/norms. Her current book project examines why some state apologies addressing government-sanctioned human rights abuses succeed in bringing about reconciliation, while others do not. Examining the conditions under which the victims and survivors of past atrocities find government apologies satisfactory and acceptable, the project looks at historical cases including the mistreatment of Indigenous Australians, state violence and civilian massacres of Jeju 4.3 events, and sexual slavery by the Imperial Japanese Army during WWII. Ji Eun holds a B.A. in International Studies with a major in American Studies from the Catholic University of Korea and an M.A. in International Relations from Seoul National University. She received her Ph.D. in Political Science and Peace Studies from the University of Notre Dame.