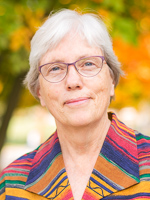 Ann Graber Hershberger has worked in family health, community health, international health, and nursing education since 1976. Ann and her husband Jim, director of Church World Service Harrisonburg Refugee Resettlement Program, have spent 10 years in church sponsored service in Central America. She earned her PhD from the University of Virginia; completing a dissertation entitled “A case study of relationships between Nicaraguan non-governmental health organizations, communities served, donor agencies, and the Ministry of Health.” She spent the 1999-2000 academic year in Nicaragua researching the project. Other research includes the experiences of families in Guatemala and West Bank, Palestine who have hosted EMU Cross Cultural students over the last decades. She has been a consultant for a Nursing School in Nicaragua, and has been on various boards of MCC (Mennonite Central Committee) since 1997, and is currently the chair of MCC U.S. Mother of three adult children, grandmother of three, she enjoys speaking Spanish, reading, gardening, and sitting on her porch.