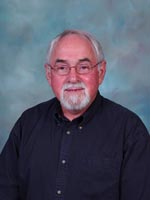 Dr. Glick’s interest in German started with his post-war service in Europe with the PAX program of Mennonite Central Committee. He taught German and other subjects at two other Mennonite colleges—Hesston and Goshen—before joining the language and literature department at EMU. In addition to teaching German, he also directed the Teaching English as a Second Language program and traveled frequently to Asia to recruit students for the Intensive English Program, which he helped establish.

In retirement, Glick pursues his interest in music (his first major in college) and stone masonry (which he learned in PAX in Europe). He volunteers a lot of time at Valley Brethren-Mennonite Heritage Center, where he is supervisor of buildings and grounds. He also volunteers at Booksavers and has been involved in refugee resettlement over the years.