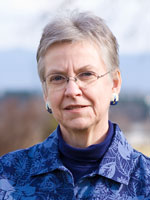 Fast, a paper maker, has recently been combining interests in art history, politics, and current events in a series of “Madonna” mixed media pieces inspired by Medieval altarpieces.They involve such diverse media as gold leaf and handmade barbed wire and techniques such as collage, computer printing, and machine quilting on both fabric and hand made paper.

In the fall of 2011 Fast was one of 11 Mennonite Artists selected to have work placed in the new Mennonite Church, USA building in Elkhart Indiana. Her piece, Good Seed on the Land is a 9 ½’x 3 ½’ triptych of abaca hand made paper and pigments.

For a second year, she enjoyed being part of a three-person team as juror for the Art Exhibition at VMRC which draws hundreds of submissions from around the country. The exhibit has won the reputation as one of the top art shows in the area.

Spring semester of ’08, Fast was granted a sabbatical term in Egypt. In addition to a teaching assignment at the Coptic Cathedral under Mennonite Central Committee in Cairo, she studied major ancient monuments and artifacts in Cairo, Giza, Luxor, Aswan, Abu Simbel, Alexandria, and the Sinai.

A second interest was an investigation into contemporary art in Egypt where she visited galleries in Cairo and Alexandria. She was also fascinated by life in one of the largest developing cities in the world and learning about the complexities of Muslim/Christian relationships in the Middle East.