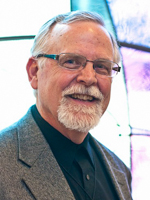 Don Clymer has broad international experience in Latin America and Europe in both church-related service and academics. Prior to EMU, he taught Spanish, German and Latin American studies at Hesston (Kas.) College and directed their Global Issues Seminar. Along with teaching Spanish at EMU, Don and his spouse led four cross-cultural seminars to Guatemala and Mexico. He has graduate degrees in both Spanish Literature and Spiritual Formation.

Don served five years as director of EMU’s Cross-cultural Programs. In 2006 he returned full-time to the classroom. In May, 2016, Don retired from 34 years of teaching, and spent the first year of his retirement in Switzerland leading seminars on spirituality and culture and translating a play from Swiss German to English.

Bringing his many experiences together has led Don to explore in depth the intersection of cross-cultural experiences and spiritual formation.

Don is the author of numerous articles in a variety of journals and has published three books Meditations on the Beatitudes: Lessons from the Margins published by Cascadia Publishing House, The Spacious Heart: Room for Spiritual Awakening, published by Herald Press and Malinda in Mexico, an illustrated children’s book published by Ettelloc Publishing.

He blogs regularly at Klymer Klatsch and has a writer’s page on Good Reads.