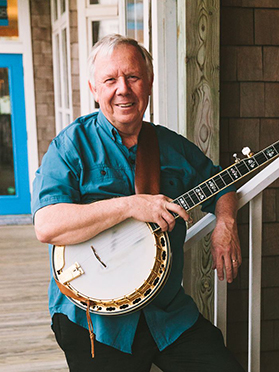 In 1940, Alan Lomax recorded Don Depoy’s family and friends as part of his collection for the Library of Congress Archive of American Folk Song. The Lomax Collection contains pioneering documentation of traditional music, dance, tales, and other forms of grassroots creativity in the United States and abroad. Don's family were among the early settlers and musicians into the Shenandoah Valley during the early 1700s. Keeping in this tradition, as a mountain music maker, Don is a master traditional guitar and 5-string banjo player. According to Steve Mandell, Grammy award winning musician (Dueling Banjos), “Don’s thumb-picking style guitar playing is the best I have ever heard. He can pick complicated lead as well as keep the driving rhythm necessary in traditional Appalachian string-band music. Following the unique banjo style of the Shenandoah Valley, Don plays the distinct melody line in and around the right-hand roll patterns. He takes an all-encompassing approach to his music and has been steadily forging a strong reputation in music both locally and abroad.” In addition to banjo and guitar, he is an accomplished mountain dulcimer, autoharp, Dobro, mandolin and bass fiddle player. He started playing music in his father’s band the Mountain Music Makers in 1957 at the age of eight. In 1971, Don started Skyline Records. Skyline Records’ artist roster included: Madeline MacNeil (folk singer, mountain dulcimer), Ralph Lee Smith (mountain dulcimer historian and scholar), Trapezoid with Sam Rizzetta and Paul Reisler (hammer dulcimer), Herb Smoke (fiddle and banjo), and reissued the 1964 recording of Carl & Don, The Skyline Pals.

Don holds a Master’s degree in Education and a Doctorate specializing in American music and popular culture. His dissertation’s external committee member was Dr. Alan Jabbour, the founding director of the American Folklife Center in the Library of Congress. Working with Alan, Don has collected several songs and artifacts that are now part of the Archive of Folk Culture at the Library of Congress. Don currently teaches bluegrass instruments at Eastern Mennonite University in Harrisonburg, Virginia, writes on the subject of Appalachian music, promotes economic development and tourism with state and local organizations and private lessons on-line and in person.

You may also visit Don's website for more information.