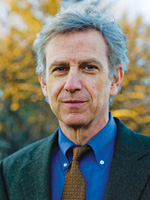 Dr. Cowles’ background is in commercial banking, where he worked for one of the largest commercial banks in New England. One of the most fascinating and fulfilling aspects of his banking career was working with entrepreneurs who had a better idea for doing something and who left secure careers to start a successful business of their own.

During a recent sabbatical he redeployed his banking skills in microfinance, working in Washington, D.C. as an investment consultant and acting director of investments at MicroVest Capital Management, a firm that raises funds from commercial investors and invests them in microfinance institutions worldwide.

Dr. Cowles’ primary undergraduate teaching responsibilities include business ethics and strategy, international business, and an introductory survey of business. He also teaches a course entitled Comparative Perspectives on Business and Society in EMU’s MBA program, which examines business ethics and policy at the level of the employee, the firm, and the macro economy. As quoted in an article on the teaching of ethics in business schools published in the Daily News Record (3/27/10), Dr. Cowles stated, “The free market system is based on trust. It’s not a peripheral issue. It’s central to the free market.”

He has also led a variety of cross-cultural programs in Japan, Europe, Jamaica, and the Navajo Nation, many of them geared toward his interests in international business and development.

Dr. Cowles formerly chaired the Department of Business and Economics and has played an active role in university governance. As Department Chair he was a practicing manager, continually involved in the types of actions and decisions concerning people, resources, and policy that most middle managers in a business–or any type of organization–are involved in. He has served on a number of committees, including the Faculty Senate, that take part in university governance, which includes formulating policy, making strategic decisions about the direction of the university, and developing new initiatives.