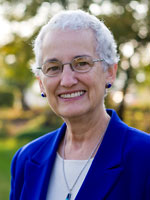 Dr. Brubaker started her long EMU career in the nursing department, which she chaired for 10 years. Recognized for her administrative ability, she was appointed vice president for enrollment management in 1994 and then provost, EMU’s second-highest post, 2000-2008. She also served briefly as interim president and at one point took on double duties as music department chair (an area that was her first major in college). After that, Brubaker led EMU’s reaccreditation effort with the Southern Association of Colleges and Schools. Currently she serves half-time as director of the Sadie A. Hartzler Library.

In semi-retirement, Brubaker is active in her church, Park View Mennonite, and chairs the board of Valley Brethren-Mennonite Heritage Center. Previously she chaired the board of Mennonite Mutual Aid (now Everence).