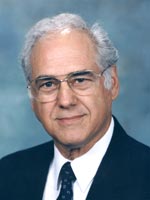 Dr. Augsburger was the fifth president of what was then Eastern Mennonite College & Seminary, serving from 1965 to 1980. He was also professor of theology from 1963 to 1980.

Before coming to EMU, Augsburger was a well-known evangelist who held crusades throughout the U.S. and Canada under the auspices of InterChurch Evangelism. He was listed in a 1969 issue of Time magazine as one of the emerging young evangelical leaders in the U.S. Augsburger is also the author of more than 20 books and served a term as moderator of the Mennonite Church General Assembly.

After leaving the EMU presidency, Augsburger and his wife, Esther, moved to Washington, D.C., where he served as president of the Council of Christian Colleges & Universities. The couple also founded a church on Capitol Hill—Washington Community Fellowship. They retired to Harrisonburg.