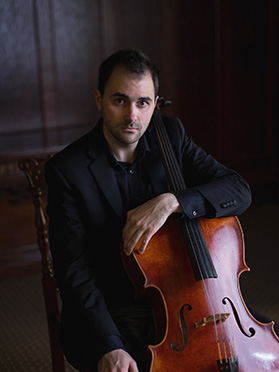 Praised by legendary Polish cellist Kazimierz Michalik for his “musical honesty”, Patrick Bellah has made it a priority in performance to connect with his audiences in a memorable fashion. He is a native of Fort Smith, Arkansas, and a graduate of the Bass School of Music at Oklahoma City University, and of the University of Arkansas. He has performed nationally as a chamber musician, orchestral cellist, and internationally as a soloist at the Kołobrzeg International Music Festival in Kołobrzeg, Poland. As a chamber musician, Patrick has performed with a wide variety of ensembles, most notably with the Northwest Arkansas String Quartet, which was featured on Public Radio International’s Performance Today during his tenure as cellist with the group. He is currently the cellist of the Shepherd Quartet, which was named as a preferred performing artist at the historic estate of Thomas Jefferson’s Monticello.

Patrick also enjoys a busy life as an orchestral cellist, having performed with numerous ensembles throughout the states of Arkansas, Oklahoma, Louisiana, Texas, and Virginia, and even briefly serving as acting Principal Cellist of the Arkansas Philharmonic Orchestra. During his time with these orchestras, he has shared the stage with soloists such as Alexander Markov, Vadim Gluzman, Cicely Parnas, Zuil Bailey, and many others.

Patrick is also very active as a music educator, and formerly taught as adjunct instructor of cello at John Brown University, and as instructor of cello with Academy of the Arts in Fort Smith. Recently, he collaborated with the critically-acclaimed Harlem Quartet in their music outreach program in the Shenandoah Valley region of Virginia. Patrick is currently a teaching assistant at James Madison University, where he is pursuing a doctorate in cello performance under the tutelage of Dr. Carl Donakowski.