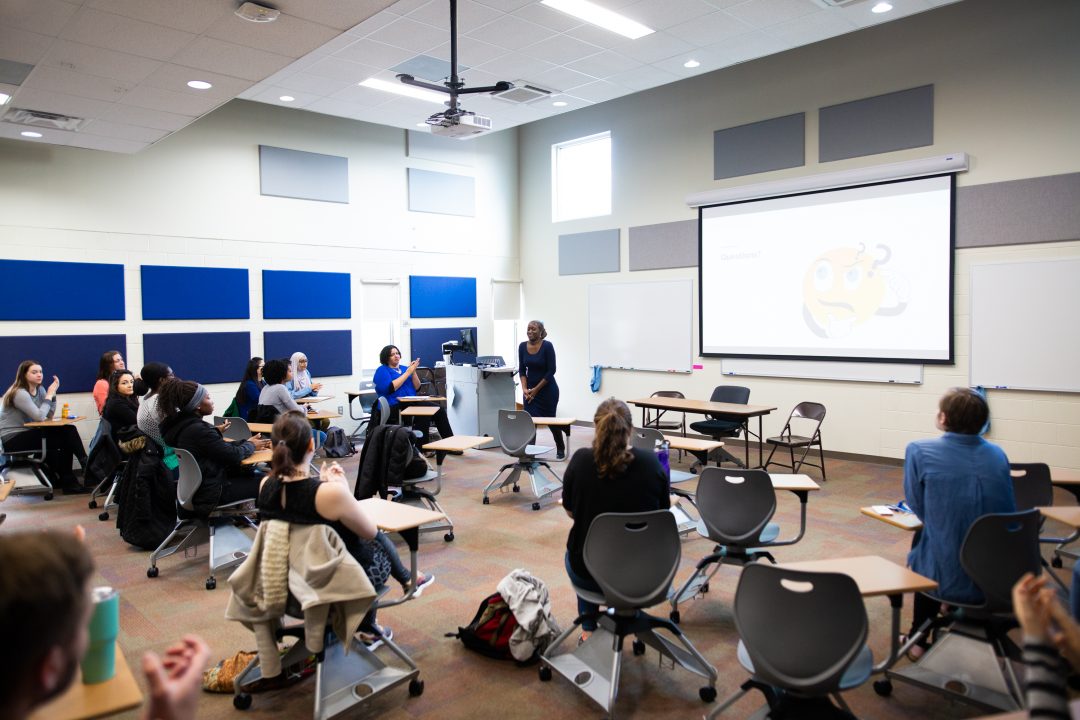 An Attempt at Decolonizing the Classroom By Myriam Aziz

I came to the U.S. for the first time when I was 15 years old. I was the only Arab in my school. When people would ask me where I was from and I would say “Lebanon,”, very few knew where that was. It seemed unfair mainly because I knew so much about American culture. It seemed to permeate all aspects of my everyday life in Lebanon without my consent. I grew up consuming American pop culture: shows, singers, movies, merchandise, etc. I knew the names of at least the last five US presidents, and I learned English because I was told it paved the way for future success. However, very few people knew anything about my country or that it was a country.

I did not have the words for it at the time, but this feeling of inferiority did not seem just. Later, I would discover Edward Said who would refer to this feeling/experience as a “Western discourse about the Other”, sustained through “a constant interchange between the scholarly and the imaginative construction of ideas about the Orient”. Since Said’s writings became an intricate part of my life, I vowed to explore ways to dismantle “ideas about the Orient”. Now that I teach at EMU, I honor my vow through the decolonization of my classroom.

My academic formation at later stages of my life taught me to embrace my identity and teach from my strengths. I did not fully internalize what that meant until I started constructing my syllabus for my Mediation and Interpersonal Processes undergraduate class for Fall 2017. I quickly realized that I owed it to myself and to my students to expose them to a fuller picture of the world; one where indigenous, non-Western, and diverse interpersonal practices are uplifted as legitimate. I decided my class would not contribute to the reproduction of global white supremacy and would not perpetuate intergenerational and historical trauma.  However, for fear of being didactic, I opted for incorporating my commitment to the decolonization of the classroom into my pedagogy.

Initially, our class carefully examined the meaning of culture and the role it plays in our institution and classroom. I invited every student to design an identity wheel that would reflect the different elements of their identity. Then, we discussed the elements they identified and why they are relevant at EMU. We engaged in a critical conversation about dominant cultures at EMU, why a culture becomes the dominant one, and how it affects individuals from the non-dominant culture.

Additionally, our diverse readings supplemented our conversations. We read different pieces from the “Re-Centering Culture and Knowledge in Conflict Resolution Practice” book, such as “Reflections on “African Americans in Mediation Literature: A Neglected Population” and “Mediating Filipino Culture”. We also read pieces on conflict transformation and community building practices in the Middle East.  We also dedicated sessions to explore Islamic traditions, Islam as perceived in the US by both the left and the right, and some challenges faced by Muslim Americans.

The students’ responses to this material were profound. Several of them affirmed (either privately or publicly) their need for these excerpts because the latter affirmed their presence in the classroom. Others disclosed that the material broadened their understanding of different cultures and introduced them to new practices. Everyone else contributed to creating a conversation where all cultures were uplifted and treated as legitimate.

Nonetheless, I did not want to teach in a vacuum. While I tried to create a safe container within the classroom, I also wanted to acknowledge skewed power dynamics outside the classroom. I also wanted to prepare my students to engage in difficult conversations that transcend academic parameters. Thus, we spent a significant amount of time discussing power. We examined structural and personal types of power, as well as the different sources of power. Students shared incredibly powerful examples from their lives. It was especially profound to hear them recall specific encounters with the police and compare those with others in the classroom. Students brilliantly identified specific elements of their identity that would become salient during times of skewed power dynamics.  Similarly, I shared my life experiences with conflict, power and gender dynamics, and my identity as an Arab in the US.

We also used the “Take a Knee Movement” as a current, relevant, and ongoing conflict to better understand dominant cultures, identity, and skewed power dynamics. Together as a class, we did a human sculpture physically demonstrating the different power dynamics at play in this particular conflict.

While our in-class conversations have been constructive, the students’ personal reflection papers have been truly profound. I believe this reflective practice safely allowed them to examine their worldviews, the lenses they carry, and their identities, and to unlearn some destructive approaches to conflict.

Growing up, I was often told the West does it best. This mentality was explicitly articulated, as well as communicated indirectly throughout my education in Lebanon. As an Arab, I was made to believe I was an uneducated citizen of a “developing country” waiting to be enlightened by the West’s best practices. As an Arab instructor in an American institution, I hope to rebel against centuries of colonization, oppression, and intergenerational trauma to create safer, diverse, and decolonized learning environments.

Myriam Aziz teaches at EMU’s graduate Center for Justice (CJP) & Peacebuilding and undergraduate department of applied social sciences. She is a graduate of CJP. Before moving to the U.S., Aziz most recently worked with the United Nations High Commissioner for Refugees (UNHCR) in the Bekaa, Lebanon.