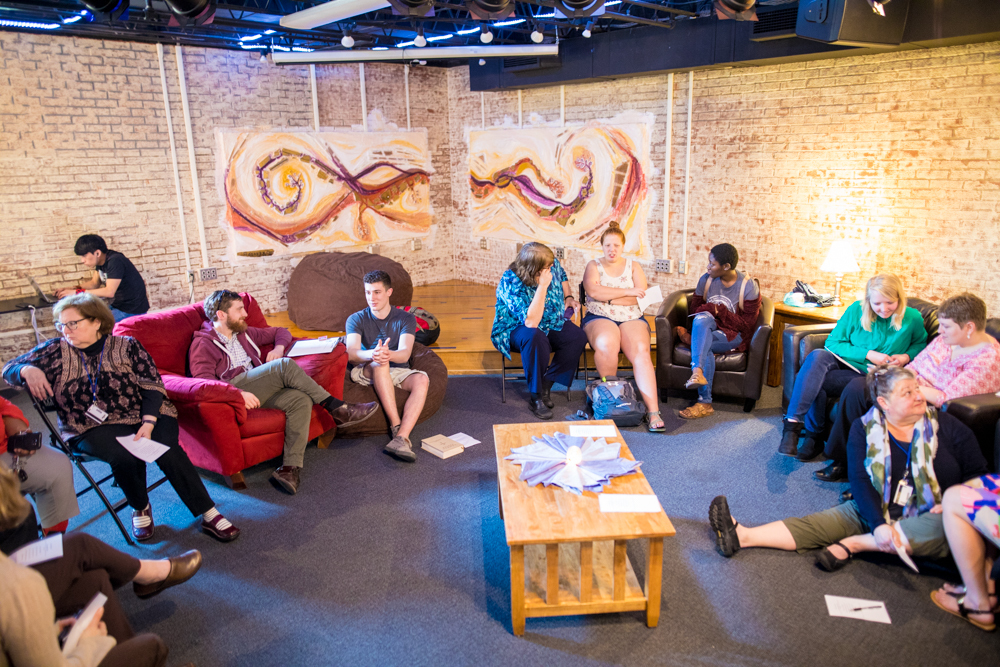 Academic department chapels at EMU are held each spring. They provide an opportunity for faculty, staff, and students to worship in an intimate setting and meditate on their vocation and divine calling. These chapels are one of many ways for students to explore the Christian faith that is part of the core of EMU’s curriculum.

A few weeks ago, I was one of three students who planned and lead the Applied Social Science department’s chapel, on February 21. We used the opportunity to reflect on Hebrews 10:26-39, our vocations, and the legacy of Malcolm X. Coincidentally, our event was held on the 53rd anniversary of his assassination. We were also joined by one our department’s alumni, Bekah York, who shared a reflection.

We adapted our program from that date’s devotion in the book Common Prayer: A Liturgy for Ordinary Radicals, by Shane Claiborne, Enuma Okoro, and Jonathan Wilson-Hartgrove.  The meditation on Malcolm X felt particularly meaningful and relevant to our times. In Common Prayer, the authors write:

“On February 21, 1965, Malcolm X was assassinated while delivering a speech in Manhattan’s Audubon Ballroom.  Malcolm X became a well-known advocate for civil rights after joining the Nation of Islam while in prison. A brilliant, self-educated leader, Malcolm experienced multiple conversions, eventually leaving the Nation of Islam after a pilgrimage to Mecca and committing to overcome racism through an international solidarity movement.  Though he was not a Christian, Malcolm X spoke prophetically about the church’s complicity in Western culture’s sin of racism.”

After that, we read scriptures from Psalms and Hebrews, which ushered us into a time of praising God and reflecting on learning the truth from those who are different than us, as the knowledge of that truth connotes a certain responsibility.  We were reminded being a Christian who lives in a world of injustice sometimes means “being publicly exposed to reproach and affliction, and sometimes being partners with those so treated” (Heb. 10:33, emphasis added).

In our Restorative Justice and Sociology courses, Peacebuilding & Development students learn truths about injustice and oppression. Hebrews reminds us that having this knowledge of other’s suffering means we are called to join with those who are committed to ending it. The chapel served as a reminder to EMU’s future sociologists, social workers, peacebuilders, and service workers to be partners with those who experience oppression that is just as real today as it was for Malcolm X.

Ben Rush is a student in the Peacebuilding and Development (PXD) program at Eastern Mennonite University (EMU). He sleeps, does homework, and occasionally writes blog posts. Shaine Claiborne is one of several Christian leaders planning the Red Letter Revival in Lynchburg, Virginia on April 6th & 7th, 2018.  This event challenges toxic evangelicalism and calls Christians to center the words and teachings of Jesus.