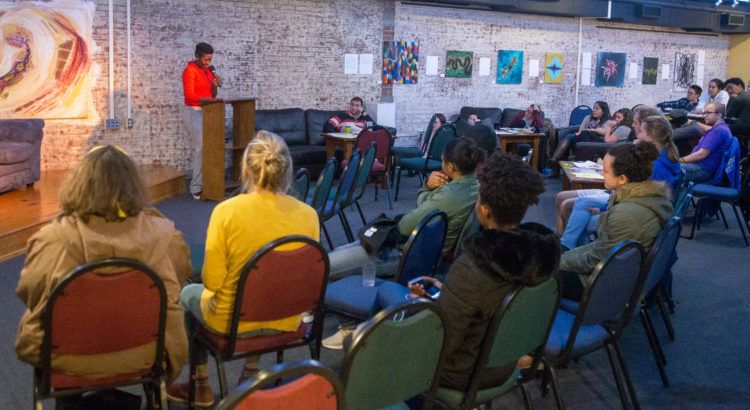 The first full week of November EMU held their annual Take Back The Night week.  This event’s purpose is to prevent sexual violence by educating, creating spaces to address the issue, and having conversations.  This year, I had the opportunity to be involved in some of the planning.  I ended up helping to plan an event for just men titled ‘How Language Legitimizes: A Second look at what we don’t think of twice’.  Even though I had only ever attended one TBTN event in my life, I was excited for this chance to hold a space for men to talk about sexual violence.

My co-planner and I both agreed that we wanted to move the focus of the conversation away from the obvious symptoms of the problem: the instances of harassment and assault we, as decent men, publicly display disgust for.  We instead wanted to look at how our culture enables these things to happen in ways most ‘decent men’ are all too complicit in.  I think my training as a peacebuilder is one of the reasons I thought we should take this approach.

In my training as a peacebuilder, I have learned that societal problems are not solved by only dealing with their symptoms, by only giving attention to the places where the problem bubbles onto the surface.  The value of the peacebuilding field is that it looks deeper than symptoms and goes after the systemic cause of conflict and injustice.  Peacebuilding is for when people realize that just fighting the symptoms of a problem means fighting the same problem for generations without making real progress.

At ‘How Language Legitimizes’, we had a conversation about how the obvious sexual violence we see is propped up by a culture that does not confront sexually aggressive behavior — a culture that says: “boys will be boys”, “she was asking for it”, and “you’d look prettier if you smiled” — a culture where messages of sexual violence find their way into our everyday language so often that it is rarely questioned.  Yet it needs to be questioned if our desire to do something about sexual violence is to have any meaning.  If all we do is wait to respond to sexual violence after it occurs, we will already be too late.  Only by digging deeply and taking a stand where the problem begins can we hope to see its end.  It may not be easy, but solving problems this big never are.

I was encouraged by the depth in which the men who came to the event explored this issue.  It seemed like we were ready to look at the problem as something we all, as men, contribute to, rather than keeping it at arm’s length.  What we need more than people who want to intervene when violence happens are people who are willing to take the first steps to ensure that it never does.  I saw people like that at our event.  You can be one too.

Ben Rush is a student in the Peacebuilding and Development (PXD) program at Eastern Mennonite University (EMU) and was a member of the student planning team for this year’s Take Back the Night week. To learn more about sexual violence and how you can respond, visit Grace: Godly Response to Abuse in the Christian Environment. If you have experienced sexual violence and need support, contact RAINN. If you have experienced sexual violence or any threat to your safety on EMU’s campus or in relation to a member of the EMU community, we encourage you to file a campus safety incident report.

Photo of a Take Back The Night program courtesy of The Weathervane, EMU’s student newspaper, which published an article about this year’s event.