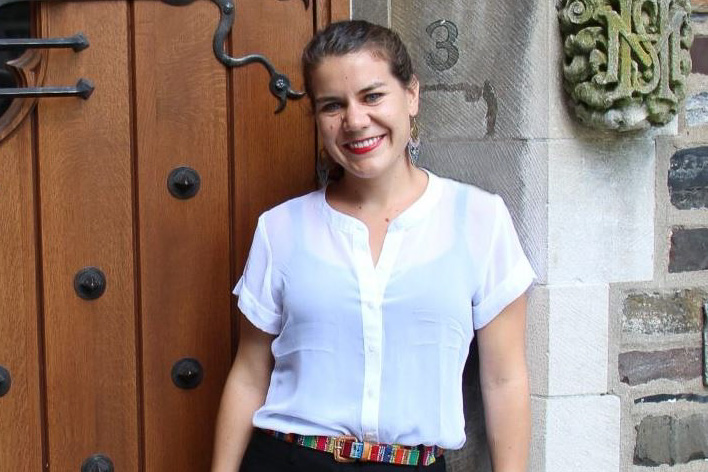 Jessica Sarriot is a 2011 graduate of Eastern Mennonite University (EMU), where she majored in peacebuilding and development with minors in pre-law and political studies. Since earning her bachelor’s degree, she has worked for Mennonite Central Committee in Colombia and the Industrial Areas Foundation in Arlington, Virginia. She also traveled to five countries to work on independent research about civil society’s role in conflict and post-conflict areas.

Describe your program at Princeton.

I am completing a master’s degree in public and international affairs at Princeton University through the Woodrow Wilson School. It has four concentrations: international relations, international development, domestic policy and economic policy. The program gives a lot of attention to quantitative tools such as econometrics (see: statistics!) and economics as well gaining a sense of how our political system works and how human psychology affects how policy is made and received. Many students who graduate go on to run for office, work for elected representatives or in local, state or federal government in the US and many others end up working for the World Bank, the UN, or other large international organizations as well as smaller NGOs.

I think it’s a program that could frankly benefit from the perspective of Mennonites and graduates of EMU steeped in peacebuilding studies. The program tends towards the status quo and in that sense, can be quite frustrating for those already shy of engaging power. Yet it also grants access to a whole new network of folks who care about what is happening politically in this world and it is a very different and important perspective for those who care about peace to have. Furthermore, everyone accepted to the MPA program is fully funded.

My studies at EMU provided me with a critical peace-focused worldview which has shaped how I approach my past professional and current academic ventures. I have tended to more naturally consider the implications of actions and policies on the poor and less powerful members of society thanks to the focus EMU’s peace studies gave me. EMU also helped me be comfortable with developing relationships with professors.

I think my grassroots experience in peacebuilding and community organizing as well as my clear focus on peacebuilding since undergrad was unique. Many of my classmates have worked in far more typical office-settings but few have done as on-the-ground work as my Mennonite Central Committee and Industrial Areas Foundation background have afforded me. Being a decent essay-writer and speaking multiple languages was also likely helpful.

EMU’s global perspective, social justice lens, peacebuilding major and required cross-cultural as well as its small size and intentionally Christian values were all attractive to me. I wanted a faith-based institution with progressive and peace-centered values.

What do you think makes EMU graduates distinctive?

EMU graduates tend to be salt-of-the-earth kind of people. I think they’re emotionally intelligent and well-rounded, by and large.

There are countless. Some of my most meaningful memories are of organizing with fellow students around anti-occupation work as it relates to Israel/Palestine and advocating for divestment. The community of student activists became my home and I can recall countless dinners, meetings and weekends working with Larisa Zehr, Meg Brauckmann and others trying to put into practice the values we were learning in class and continue to hold to today. I also deeply appreciated Professor Peter Dula‘s “Ethics in the Way of Jesus” class. I have a wonderful memory of Obama’s first election and coloring in the states he won at Common Grounds and I have wonderful memories of hymn sings and honors group hikes. By a long shot, it is the community I got to become a part of and build at EMU that has been and remains the most important take-away from EMU.