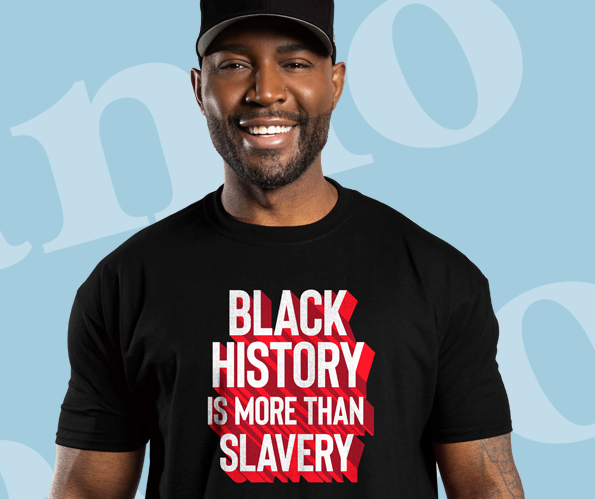 “Black History is More Than Slavery” by Professor Gaurav Pathania

Karamo Brown, one of the stars of the show, Queer Eye, wore a t-shirt in a recent episode that simply states, Black History is More Than Slavery. Crediting his grandmother who used to tell him, “Say it on your chest,” Brown uses his high-profile status to engage in anti-racist activism.

As an activist, I often encounter the question: What made me become an anti-caste activist? I look back at my childhood and think of my experiences growing up in India – a casteist society – and how people mistreated me as a member of the “lowest caste” (like denying me water, using casteist slurs, and making casteist jokes). I never understood it consciously until I read the writings of Dr. B. R. Ambedkar, who was the first “untouchable” who studied at Columbia University. Ambedkar received a doctorate in economics and law and became the leader of the “downtrodden,” a labor rights activist, the first law minister of India and ended up writing the constitution of free India. When I learned about the horrible incidents that Ambedkar went through, I felt very lucky to live in a better environment that he built through his activism. He became the role model of my life, and when I feel low I read his life story and feel inspired.

Ambedkar’s thoughts were influenced by one of his professors, John Dewey, and many others, during his education at Columbia. Later, I learned of his written communication with the American sociologist W.E.B. DuBois, who was the first African-American graduate from Harvard University. DuBois’s anti-racism activism influenced Ambedkar’s own activism in forming global solidarities against structures of discrimination. Interestingly, DuBois eventually gave up his ivy-league privilege and founded the NAACP. As a sociologist, my focus on building caste-race alliances was shaped by DuBois’s commitment to social justice.

The stories of the civil rights movement tell us that Martin Luther King Jr. was inspired by a WWII veteran Maceo Snipes who dared to use his right to vote and was lynched by a mob. Young King was deeply hurt by this incident and decided to fight against white supremacy.

This Black History Month offers many such inspiring stories of those who changed our understanding of history. The inherent message behind this storytelling conveys that we can create a truly just world by sharing our own struggles, listening to the stories that are not our own, and refusing to be silent when anyone’s freedom to live peacefully is under attack. Storytelling, therefore, offers a new lens to look at our global reality differently and has the power to change one’s perspective. In the words of the famous writer and activist James Baldwin: “The world changes according to the way people see it, and if you alter, even by a millimeter, the way… people look at reality, then you can change it.”

Gaurav J. Pathania is a visiting assistant professor of sociology and peacebuilding at the Center for Justice and Peacebuilding at EMU. He is a poet, an anti-caste activist, and a community organizer. To read more about his work, see gauravjpathania.com.