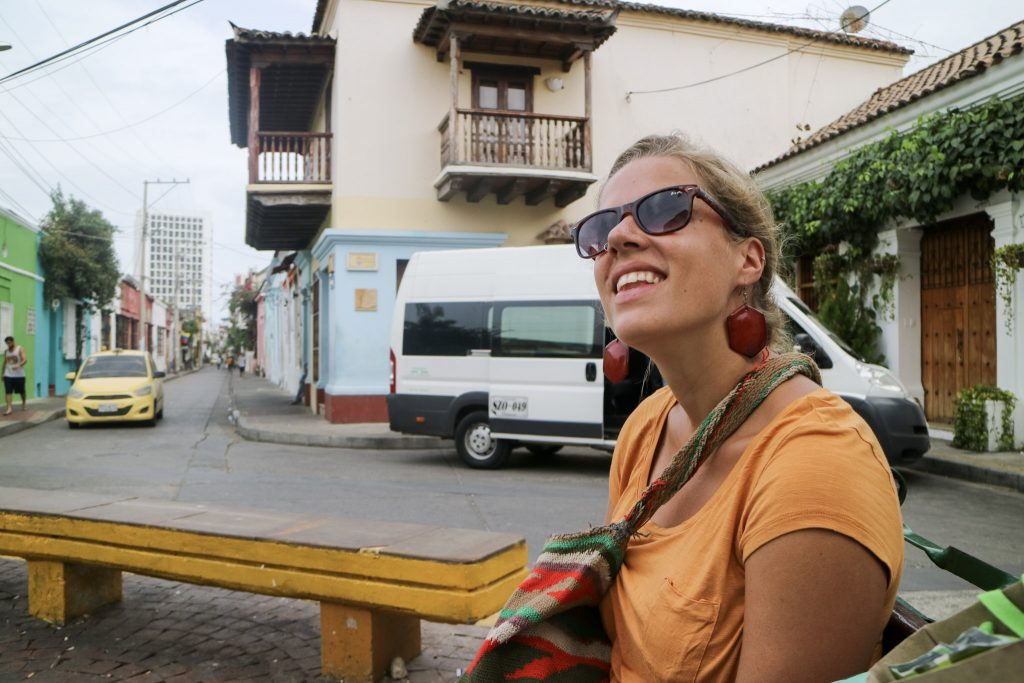 Larisa Zehr is a 2011 graduate of Eastern Mennonite University, where she majored in peacebuilding and development, and minored in pre-law, history and social sciences, and political studies. Since graduation, she has worked for the non-government organization (NGO) Sembrandopaz in Colombia – first with Mennonite Central Committee (MCC), then directly as a staff member. She has recently enrolled in the Northeastern University School of Law.

What kind of work have you been doing since graduating from EMU?

I have been working for the last six years at a small NGO on Colombia’s Caribbean Coast, for the first four years with Mennonite Central Committee (two years in the youth volunteer program, Seed, and two years as a service worker) and then directly with the organization. Asociación Sembrando Semillas de Paz (Sembrandopaz) translates as Association Sowing Seeds of Peace (or Sowing Peace).

Areas of interest, both mine and the NGO, are:

My professors, my investment in academics, and my involvement in social organizing and advocacy on campus prepared me for this work in many ways. These factors helped to shape a critical lens through which I view accompaniment and peacebuilding work; the approach to history, political studies, social movements, etc. through non-dominant voices (although there is much to be improved on here, there are attempts that are very valid); through practical skills for peacebuilding like mediation training and restorative justice; through the inclusion of the arts/literature/music/poetry as expressions for peace and justice … in many ways.

Overall, I would say that the most influence EMU has had in shaping my work is in my worldview. I worked hard on a foundation for my commitment to peace and justice while I was there, and that laid the groundwork for continuing to strengthen that commitment in the following years. Also, the practical advocacy I engaged with when I was on campus was really important for me and other students to try out what we were learning. In student organizations such as Safe Space, Morally Responsible Investment in Israel and Palestine, Peace Fellowship and many other spaces we got to engage with issues and seek change in our local community.

Perhaps these two things: a deep experience in one specific place – I have lived in the same town in Colombia for those six years – which I got to know well (for being a total outsider) and to love and care about passionately; and, being Mennonite and also having a Mennonite academic experience stands out, I think, because of the commitment to peace, justice, and service in everything we do, which is unfortunately an outsider perspective.

What do you think makes EMU grads distinctive?

I think the community commitment is huge – the fact that we talk and think and try to be community isn’t very common. And, as I’ve said, the commitment to peace and justice from whatever the vantage point we are working or living. Part of being in a community is that you don’t just split when things get hard or confusing. The EMU folks I know dig in, ask tougher questions, meet more people, turn over a new leaf. We come from a outsider perspective, and that makes us more critical as well.

I had lived in several places as a kid and didn’t have a geographical community, so the Mennonite community was really a grounding and centering place for me. I am ethnically Mennonite, so I “belonged” there, as I didn’t perhaps in other places. What kept me there were the solid, grounded, provocative, inspiring folks who so committed to community, peace and justice that I met and studied with.

Again, I think the on-campus organizing are really amazing memories. For most of my finals, I did some form of creative expression or practical application of the theories we were learning.

We built a model of the wall that Israel constructed to enclose and occupy Palestine.

We met off campus to think together about what a Safe Space for LGBTQ folks could be.

We road-tripped to the protest of the School of Americas in Georgia and went to public dialogues about mercenary armies and theater of the oppressed.

I went with fellow students to South Sudan, to an intentional community in Georgia, to visit prisons, to Palestine, to visit mountaintop removal coal mines.

We tried so hard to apply what we were learning, and I think that was honestly the most important thing we could do: reflection-action.

How did MCC’s Seed program prepare you for graduate studies?

Seed is a two-year service, reflection and advocacy program. Seed was challenging and illuminating in so many ways. I’ll name just two – in Seed we lived immersed in local communities and could see what peacebuilding, development, justice, legal, and armed conflict realities looked like on the ground. When it rained and no one came to the meetings, we learned about logistical challenges for rural communities. When people kept calling phone numbers in the capital, Bogotá, to update their ID number in the system only to find it never changed in the national database when they went to register for reparations months later, we learned about breakdowns in bureaucratic systems. When people didn’t trust a certain community leader because of an incident that had occurred in the armed conflict, or when people didn’t go out walking at night, or when people didn’t talk about certain things on the phone, or when a community leader we worked with was arrested on false charges, we learned about the impact of armed conflict on a community’s psyche and the ongoing threats it poses to community organizing.

Secondly, Seed was my first experience working in a team that was more diverse than mostly middle class U.S. citizens. It is so valuable to work on a daily basis with folks who are looking at the world from a marginalized perspective – not just to be friends, but to make daily work decisions about money and vacation time and advocacy and spirituality. I always want to seek that.