Bluffton University senior Shanon Gallagher started her internship at Carroll Manor in the Brookland neighborhood of Washington D.C. just weeks ago, but she walks through the halls of the multi-story nursing and rehabilitation home among many friends.

“I’ll see you later today,” she promises a woman in a wheelchair.

“Have you been knitting? Are you ready for class?” she says a few minutes later to another, then confides that she’s recently met the woman’s daughter, who came on a special visit just to meet her. 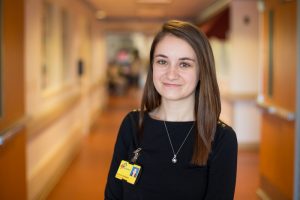 Gallagher’s 10-week internship is just one aspect of summer participation at the Washington Community Scholars’ Center (WCSC), a program also offered during fall and spring semesters by Eastern Mennonite University (EMU). Bluffton University students share a house in Washington D.C. with students from EMU and other partner universities, take a full load of coursework, explore life in the nation’s capital, and delve into a chosen professional field.

The program has been in Washington D.C. since 1976. Some internship sites have partnered with EMU since that time and those internships have often led to both job opportunities after graduation and even career positions.

“Historically, social work majors have been the bread and butter of the WCSC,” says Director Kimberly Schmidt. “We have expanded and have strong options for students from other majors but even I find the sheer breadth of our social work practicum site options a little staggering.”

WCSC faculty and staff lay important groundwork before and during the internship, talking with both the student and the supervisor about internship and career goals to ensure the time in Washington is well-spent. The topic of career development is also considered in a course titled “Servant Leadership in the Urban Setting” that helps students consider their future profession in terms of their personal values and faith.

When she first applied to WCSC, Gallagher worked with program assistant Karlyn Gehring to develop her resume, then with advisor Professor Ryan Good to find the right internship site. Good and Schmidt help walk students through the application and interview process for internships before they arrive, and then offer vocational guidance throughout the summer.

Gallagher, a psychology and sociology major from Bluffton University, had worked as a hospitality aide for a year and half at a smaller facility back home in Marengo, Ohio, and was seriously considering a career in geriatrics.

Working at a large-scale facility like Carroll Manor has helped confirm what kind of work environment Gallagher prefers – “smaller is better,” she said, “because I want more time to get to know people” – and a possible next move.

At Carroll Manor, her supervisor was one of five licensed social workers in the entire facility – and Gallagher says she observed that the certification, and eventually the earning of a master’s in social work degree, would create more possibilities and options for her future.

“I’m seriously thinking about social work licensure,” she said, when asked about her next steps. “And possibly going to graduate school after I gain some experience.”

Supervisor Vickie Merlo had only good things to say about Gallagher. Working in a facility that serves elderly and infirm residents, some of whom suffer from dementia, is a challenging environment that requires empathy, flexibility and patience.

Gallagher radiates calmness and confidence in her interactions with patients. “Her enthusiasm and just general good spirits are a real asset here,” Merlo said. “We have certain patients who have problems with dementia and behavior who take lots of attention, and Shanon has been a godsend. She’s excellent at approaching people and saying hello and introducinge herself; she just warms up to people easily.”

That trust has resulted in an internship that provided plenty of space for Gallagher to find her niche, which has included one-on-one time with special residents needing more attention, some paperwork duties and the planning and implementation of activities, among other responsibilities.

Even though she has little experience with knitting, Gallagher started the Maple Way Floor Six Crochet Club, which meets twice a week for about an hour. To do that, she found a local expert:  “There’s a lady who really knows what she’s doing, so I’ve pulled her in and asked her to help and I just figure it out along with everyone else,” Gallagher said.

Both Merlo and Gallagher hope the crochet club continues after her internship concludes, but without the cheerful presence of this young intern, that might be tough.

“I’m definitely going to miss this place when this is over,” Gallagher said. “Leaving is going to be tough.”