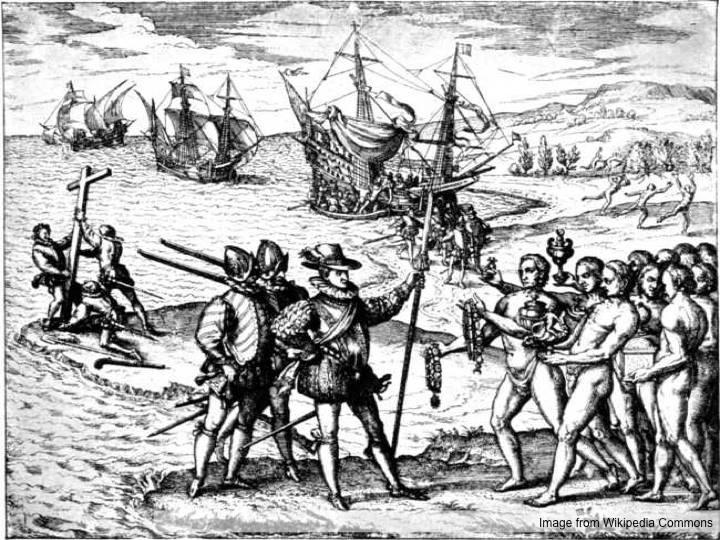 This Indigenous People’s Day, Eastern Mennonite University held two events to honor the people living on this continent who were displaced by colonization. The first event, Dismantling the Doctrine of Discovery, provided an introduction to the influence of church doctrine on colonialism and featured a documentary and a discussion. The second event featured the documentary film The Eagle and the Condor, and included discussion, as well. As two of several organizers of the Doctrine of Discovery event, we’d like to share what we took away from the experience.

Historically, the Doctrine of Discovery stated that European countries could, and should, conquer any lands inhabited by non-Christian people. It became part of international law and continues to be used as justification for the seizure of land from indigenous people. For this event, we showed clips from the film Doctrine of Discovery: In the Name of Christ, which covers the history of the Doctrine and Mennonite involvement in colonialism.

When planning our portion of the Indigenous People’s Day activities, we decided to show only a portion of the film and provide plenty of time for discussion, since there would be another documentary screening later that day. We heard feedback from a few students, however, who stated they would have preferred the time be more educational and less reflective. Students expressed that they did not know much about the Doctrine of Discovery beforehand, and thus they didn’t feel prepared to discuss it. Some had never looked at the church’s role in colonialism before. A few students were very involved in the discussion and appreciated the focus of the event. This knowledge gap seemed to exacerbate a divide between undergraduate students and staff/faculty/grad students. This is a good reminder that sometimes it is just as important to share knowledge and provide context for a conversation, as it is to provide time for discussion.

In the future, we might consider creating discussion groups that are mixed between undergraduates and staff/faculty/grad students so that some people with more knowledge can share it in the context of the discussion. Also, we will consider different discussion questions that are less based on knowledge of the Doctrine of Discovery and more directed at reactions to what people are learning from the documentary so that participation in the discussion is not based on historical knowledge

As leaders, we have complicated feelings about mixed groups. Professor Tim Seidel suggests that separate groups can mitigate intimidating power differentials and create a space where undergrads are more empowered to participate in the discussion. Emily believes that mixed groups could have helped provide the educational component some students felt was lacking. We both think that facilitators could address this dynamic, and perhaps create a space of equalization between these different groups. Careful facilitation can ensure everyone has the opportunity to have a voice, despite differences in authority. However, there is potential that even the most careful facilitation can emphasize differences in knowledge and power already at play in a collegiate environment.

Next year, we will start planning events for Indigenous People’s Day further in advance. Doing so will allow us to address some of these concerns and we would be better able to coordinate a full day of events. For this year, though, just starting this conversation on campus is work we are proud of. For Yasmiene, as a non-Christian, raised Muslim in the U.S., it was extremely meaningful to see Christians taking responsibility for the role their tradition has played in colonialism and start to engage with what that means historically and currently. For Emily, as someone who has come back to Christianity after many years away, it was reassuring to see a religious institution interrogate itself in the way she critiques the Church regularly. We look forward to many more conversations about our accountability, as a community, in the role of colonialism, and what we can do to support modern indigenous peoples.