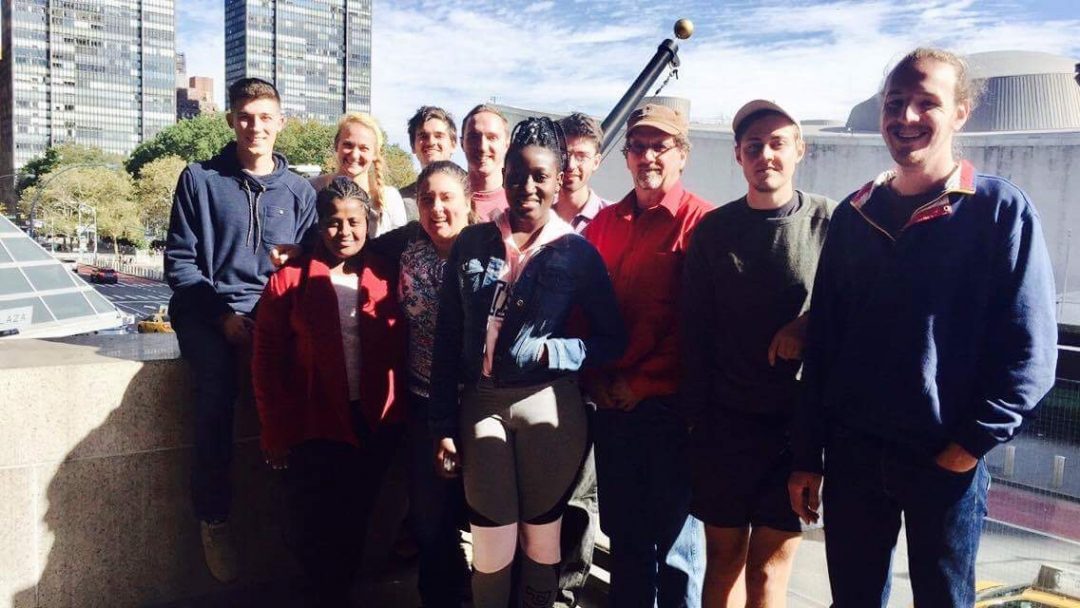 Our tour guide is quick and witty. I bet he’s led his fair-share of groups.

In between rooms, we see various displays in the hallways: The Universal Declarations of Human Rights, The Sustainable Development Goals, numerous pieces of art, and displays depicting the horrors of war.

We stop at a map showing current United Nations Peacekeeping Operations (UNPKO) all over the world.

In describing UNPKO, our tour guide doesn’t hesitate to mention: “For the first time in the history of Peacekeeping operations, the one in South Sudan is sheltering thousands of people”.

“That’s fantastic! But what about the opportunity to shelter people in Rwanda during the genocide?”

Moving into one of the rooms where diplomats speak, the tour guide notes that the mural we are standing in fronting of (an interlocking of oranges and white stripes) represents peace and development. He says: “You can’t have peace without development, and you can’t have development without peace.”

Do you think he means that developed countries are more peaceful? Or that development needs to be imposed on countries that don’t seem able to obtain it themselves?

But I don’t think he means any harm, he’s got such a friendly smile.”

As we toured the UN yesterday, we were shown a replica of a UN peacekeeper guardpost. There was a sudden “wow” said by the girl next to me. I noticed others taking pictures and just being genuinely fascinated by it.

I, on the contrary, was anything but impressed.

Hailing from Liberia, where the United Nations Mission in Liberia (UNMIL) had been present for 14 years, I was very familiar with the guardpost. They were a part of my daily life. They were everywhere; on every block much like the McDonald’s you have here, except they weren’t selling food.  They were sowing fear.

As I reflected, I realized how different my interpretation of that guardpost was, when compared to the rest of my group and the rosy picture painted by our tour guide.  Though I would use similar phrases like “peacekeepers are there to help maintain and prevent possible outbreaks,” I would also describe to you the fear that those guardpost instilled in me as I walked past those big weaponry machines every day on my way to school.  I would tell you how the men and women behind those machines never smiled; and how I learned to avoid making eye contact with the “peacekeepers.”

The UN, sanctions, peacekeeping, and diplomacy: Who benefits? We can not expect absolute answers to our questions, but they must be asked. Outside interpreters of the UN must question their actions and decipher their motives. MCC is trying to act like a speaker to amplify the voices of the demographics most affected by UN policy to tell an alternative story of who is benefitting and who is suffering. And we are not optimistic. We did not witness the impact of that different story at the UN.

Winifred Gray-Johnson and Noah Haglund are currently studying in the Peacebuilding and Development (PXD) program at Eastern Mennonite University and are members of EMU’s Peace Fellowship.