The 44-year-old bilingual producer collaborates with young, talented and eager consultants to create products for diverse clientele, from consulting groups, corporations and businesses to nonprofits such as the Latino Economic Development Center, the Avance Center, and the Alzheimer’s Association.

Mentoring young people, especially those with interest and aspirations in digital media, has always been important to Villalba, from his initial work as a youth substance abuse counselor to his current communications business.

“A long time ago, someone asked me what my best job would be and I said, ‘working with young people and making films,’ and here I am years later” he said. “I opened myself up to the universe and the universe has blessed me.”

The WCSC program hosts students in the fall, spring and summer from EMU and partnering institutions. Students gain work experience in internships at sites located around the city while earning a full course load of credits, engaging with urban culture and history and living together in an intentional community.

“With a growing number of visual and communication arts majors participating in our program and looking for quality internships with supervisors who provide mentorship and support, we have benefited immensely from Ricardo’s willingness to invite our students into his work,” she said. “He serves diverse communities and those interactions provide valuable learning experiences for our students.”

Julian Bussells, a senior digital media major at EMU, was the latest student to benefit from an internship with the company. He had a wide range of responsibilities, including “going out to events to shoot video, editing videos to specifications, and also building and updating websites,” he said. “Sometimes the work was overwhelming because there was a bunch of tasks, but I have enjoyed the challenge.”

During this summer’s WCSC program, two other students participated in related internships. Rances Rodriguez was a documentary photographer and videographer for the Sitar Arts Center, which offers arts education to several hundred low-income K-12 students through a wide array of programming. Stephen Sheppard, a double-major in digital media and business administration, created and taught design and photography projects in support of a youth summer arts and peacebuilding program at the Latin American Youth Center (LAYC).

What one may think of an unlikely place for one’s talents to emerge is actually “where the universe opens doors,” Villalbas says. He benefited as a high school student from LAYC programs and later returned there as a substance abuse counselor. That position led to a creative public-service-style, youth-oriented video series and later a fundraising video for LAYC, both of which circulated to some notoriety and eventually led to his current business. 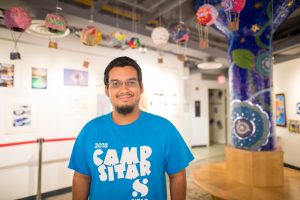 Bussells’ experience at Washington Digital Media has confirmed his future career choice (his dream job is to work on movie sets) and helped to give him an idea of working with and for clients – quite a different experience than producing a finished product for a grade, he said. “I’ve enjoyed doing meaningful projects for paying clients, which has given me an idea of what it takes to succeed in the video production business.”

Rodriguez spent his 10-week internship hustling around the center, dodging musical instruments, dancers, singers, paintbrushes and even other digital cameras, as he sought to document the Sitar Center’s ambitious summer programming. Once the children got to know him, they were eager to share their creations, to pose for photos and sometimes even – of course – photobombs.

“I’ll take a group photo and there will always be this one kid making a silly face and I’ll have to say, ‘ok, one more,’” Rodriguez said.

He’s also collected footage chronicling the mural arts program and its participants, as well as the center’s annual musical production (this year, it was “Seussical”) that his supervisor says will be used for fundraising and recruitment efforts.

Storytelling is his passion, Rodriguez says, and he has enjoyed learning how to work with people, in this case kids, to get the most authentic images that will tell a powerful narrative – a skill he’ll take back to EMU with him for his senior year, and beyond.