Eastern Mennonite University’s second annual Donning of the Kente Ceremony celebrated the accomplishments of students of color. The event, sponsored by Multicultural and International Student Services and Black Student Union, was Thursday, April 19.

The Kente is a colorful cloth stole native to Ghana, said Celeste R. Thomas, co-director of Multicultural and International Student Services and the event’s host. Kente was developed in the 17th century by the Ashanti people with roots in a long tradition of African weaving dating back to about 3000 B.C. Often reserved for special occasions or royalty, the stole is a visual representation of history, philosophy, ethics, oral literature, religious beliefs, social values and political thoughts.

Last year was the first year of the ceremony. Students will wear the Kente during commencement ceremonies this weekend.

Keynote speaker Tisha Ntiamoah, professional director of James Madison University’s MBA Program, spoke about transitioning from being a student to starting a career. She encouraged the graduates to practice mindfulness as they prepare to enter the workforce. Ntiamoah, whose research interests include transition theory, gave several tips: take time to understand the work culture; have humility, be slow to form alliances and quick to network; get involved in the community and give back to their institution.

“It doesn’t matter what your context has been up to this moment, what hardships you may have had,” she said. “What matters is the choices you make to go forward and how you choose to make that transition in your life.”

For the donning of the Kente, each student was joined on stage by an individual who had made an impact while at EMU. These friends, faculty or family members were invited to speak about the student and drape the stole across their shoulders.

The Kente recipients have already began giving back to EMU. Thomas read aloud their advice for underclass students.

Theatre major Ezrionna Prioleau encouraged students to “try something new and have fun while in school.”

“Don’t give up!” said Azariah Cox, who will graduate with a degree in photography and digital media. “Things will try to knock you down, but don’t let it shape who you are. Achieve, achieve, achieve.”

Recipients of the Kente with their chosen speaker

Also recieving the kente but not present for the ceremony were Diego Barahona, Natasha Buskey, Alexander Short and Julian Turner. 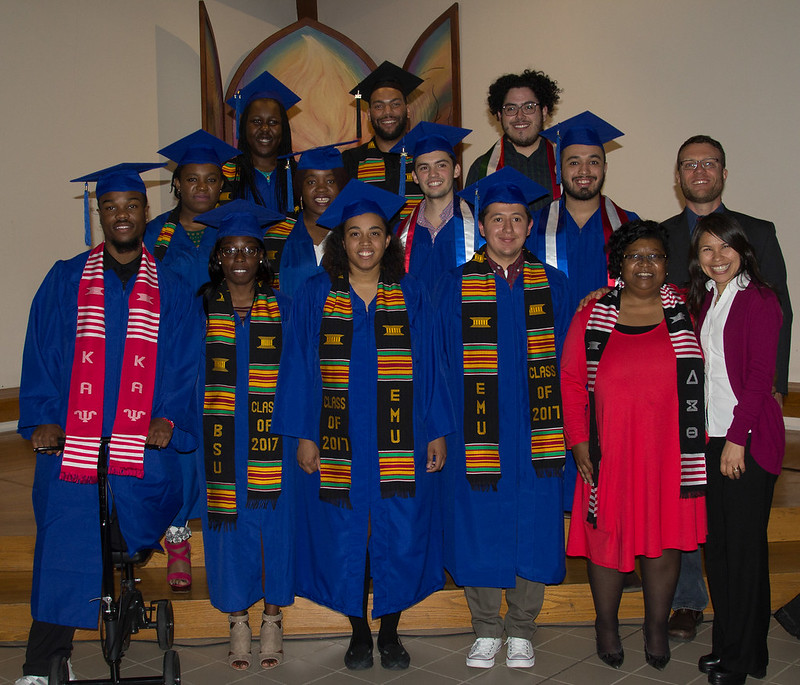