Yarrow was on campus for a board meeting of Better Angels, a bipartisan organization which uses dialogue processes to improve approaches to conflict among Americans across the political spectrum. The organization’s name refers to President Abraham Lincoln’s call to recognize commonalities in the midst of conflict, made during his first inaugural address on the eve of the Civil War in 1861.

Listen to Peter Yarrow and the audience sing “Puff the Magic Dragon” at EMU.

“We share with Peter a long-term commitment to social justice and peace, and are honored to have him and the board members of Better Angels here,” Goldberg added. “It’s a special opportunity for us and for SPI participants from around the world to hear his message of unity and humanity.”

Several other experts, each of whom work specifically in the context of conflict transformation, were on campus this week: author and speaker David Campt, who works in the area of race relations; Kay Pranis, a globally recognized trainer on circle processes; and Ed Brantmeier, a professor at James Madison University who specializes in peace education. Katie Mansfield, director of the Strategies for Trauma Awareness and Resilience program, also offered a self-care course with Katie Ornelas.

A deep concern about civic diviseness and hostility in the United States led Goldberg and SPI faculty to develop and adapt several SPI courses this summer aimed at helping community members and organizations work in civic engagement, conflict facilitation and dialogue processes. This focus will continue in 2018 at SPI, Goldberg says.

Listen to WMRA coverage and watch WHSV coverage about the June 17 workshop.

Earlier in the week, the Horizons of Change Luncheon Series hosted Kai Degner, a mediator, former Harrisonburg mayor and state congressional candidate. Degner spoke about the power of listening, rather than talking in dialogue, and his campaign, called the “Listening Corps,” to bring people together through facilitated dialogue.

Yarrow’s concert drew SPI participants and community members, some of whom had deep personal connections to the singer and his music.

Yarrow invited sharing, which led to a touching moment with Tom DeWolf, who works in interracial dialogue and healing as executive director of Coming to the Table. The two men embraced, prompting DeWolf to tell Yarrow that they had hugged nearly 30 years before at a concert in Eugene, Oregon.

Yarrow deftly wove his own music, jokes, stories and shared singing into a nearly 90-minute concert that included favorites like “Leaving on a Jet Plane,” “This Land is Your Land,” and “This Little Light of Mine.”

“When we sing together, the mask drops away and I can hear your heart,” Yarrow told the audience.

With Better Angels, Yarrow has been traveling and singing with people of different political persuasions. The organization is hosting a summer bus tour, kicking off on July 4, which will make stops in communities around the country to host workshops bringing together Republicans and Democrats. 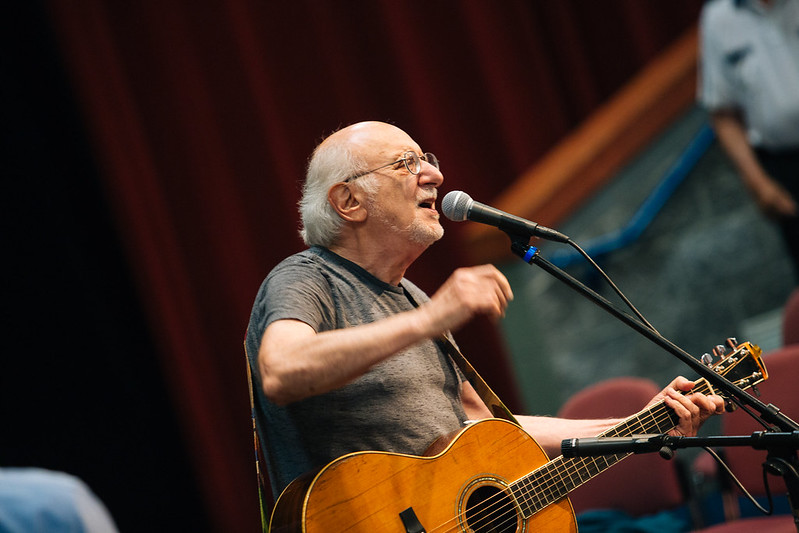