Najeeha Khan came to Friday’s Summer Peacebuilding Institute Community Day at Eastern Mennonite University (EMU) to gain organizing skills and learn about facilitating dialogue. The senior international affairs and religion major at nearby James Madison University says she and a friend with the university’s Muslim Student Association are “trying to organize an event that addresses Islamophobia for a conservative audience.”

Khan was among the 72 participants to participate in the second annual event, which offered a full day of networking, workshops and seminars modeled after the Summer Peacebuilding Institute, a program of the Center for Justice and Peacebuilding (CJP).

“I’m getting the tools to move my vision forward … it is really inspiring,” Khan said.

That sentiment is exactly what Bill Goldberg, SPI director, likes to hear.

“SPI has 22 years of experience helping people work for justice, peace and good governance around the world in places where governing systems are not working well,” he said. “I’m delighted that local and regional citizens and organizations see us as a great resource to build both personnel and organizational capacity for more efficient and effective work.”

To view classes and more information about the 2017 Summer Peacebuilding Institute, click here.

Topics included conflict transformation, dialogue, leadership, restorative justice and organizing skills — a sampling of the courses available at the 2017 Summer Peacebuilding Institute this May and June. Many of the five- and seven-day courses that will be offered have been developed to help those interested in civic engagement gain skills to organize or lead community processes and learn to talk to people who may not agree with them to resolve common community problems, Goldberg said.

More than half of the participants were from Harrisonburg, with the remainder from Virginia, Maryland, Washington D.C., West Virginia and Pennsylvania.

In her opening plenary titled “Leading from Within: ‘Being’ in the Fight for Justice,” Professor Johonna Turner talked about visioning and then bringing the desired new world into existence “by our ways of being with each other and by the means through which we work for social change.” 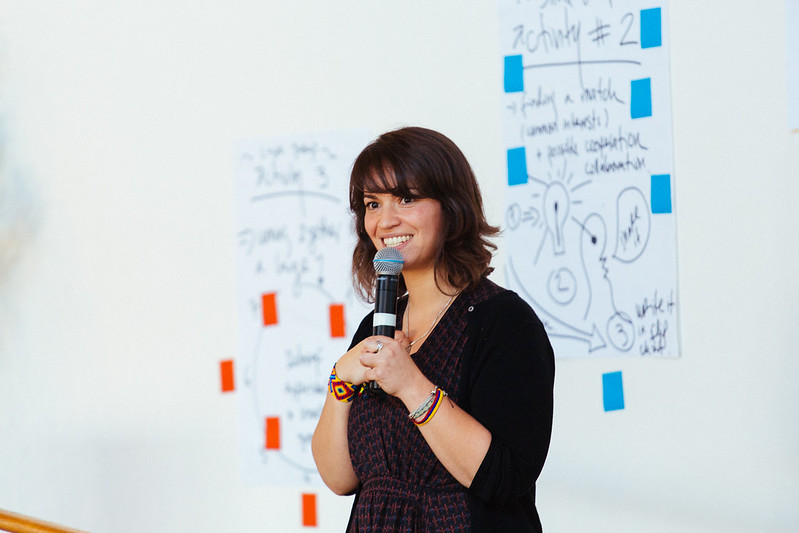 “Listening is not consuming, obeying, agreeing, tolerating, empathizing, charitable or easy,” Degner said. “Listening is what it takes to make the speaker feel heard and understood.” He presented his community meeting model of the “Listening Café,” in which small groups take turns first speaking to active listeners, then being respectfully responded to by each member of the group.

Patrick Campbell, senior disaster program manager for the Virginia Capital region of the Red Cross and a 2014 graduate of CJP, said he’d “like to see my field employ more community sessions of listening.”

The theme of better communication was reflected in workshops such as conflict coaching, led by CJP Academic Programs Director Jayne Docherty, who drew on her time spent with Burmese rebel groups in Myanmar to illustrate the different levels of conflict coaching and associated strategies. Participants shared stories from organizational conflicts they’d been involved in working in churches, government and summer camps.

“Faith-Based Peacebuilding: Structuring Hope Locally” was led by Roy Hange, pastor and SPI instructor. Hange outlined ways that faith communities exhumed past trauma, expressing it biologically and finding ways to repair relationships: from the United Kingdom and the Irish Republican Army to black and white clergy in Charlottesville.