More than 150 members of the Eastern Mennonite University and Eastern Mennonite Seminary community gathered in the campus center Wednesday for a Holy Week service around the “alfombra,” or carpet, a colorful tradition of Central America and Mexico. [See slideshow below.]

The four sections of the alfombra, made of rice, flour and other materials and created by EMU’s Latino Student Alliance (LSA), represented immigration and refugees, salvation, hope and suffering.

Celebrants formed a processional around the artwork, walking together for brief periods of silent meditation between scripture readings and hymns sung in both Spanish and English.

A devotion of time

Members of the LSA, assisted by Professor Cyndi Gusler, started creating the artwork on Monday. They would eventually invest approximately 40 hours in the creation. Their painstaking work drew the attention of the Daily News-Record and WHSV (to view coverage, click here.)

“These alfombras are made to welcome Jesus in remembrance of His entrance in Jerusalem during Palm Sunday,” said LSA leader Rebecca Cardwell, welcoming the community to the service. “Instead of palms, the communities prepare these colorful rugs to welcome Him as their King.”

Cardwell is one of four seniors – including Ana Cruz, Fernanda Hernandez and Paola Diaz – who have helped the Latino Student Alliance become more of a presence on campus. One goal of the group is to prominently feature the vibrant diversity of Hispanic culture.

Additionally, the group has hosted a variety of activities to strengthen ties with local Latino students, many of whom commute to campus, in addition to raising awareness among the broader EMU community. Their annual banquet, held in September, is a sign of their success: With attendance growing each year to 180 people in 2015, they catered their last event.

Initial plans were to remove the alfombra before Easter break, but Susannah Lepley, director of multicultural student services, says interest from local church groups coming to campus to view the alfombra has changed plans and the artwork will be remain through March 31. [The university is closed for Easter break March 25-28 and will reopen March 29.]

Because of the excitement generated by this project, Lepley suggested that a wider Holy Week event and bilingual worship service could be a possibility for next year, with community groups and congregations invited to design and create their own alfombra.

The EMU campus community has many connections to Central and South America in addition to students, faculty and staff native to those countries, including the club’s advisor, M. Esther Showalter, a native of Bolivia. Noted in the crowd were many faculty and staff who have lived and worked in Central and South America. Additionally, a cross-cultural study group is spending the semester in Guatemala and Cuba, with Elaine Zook Barge and her husband, former MCC workers in El Salvador, Nicaragua and Guatemala for 15 years. 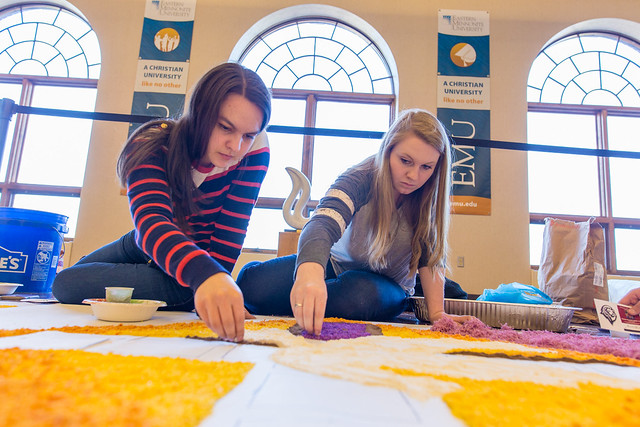