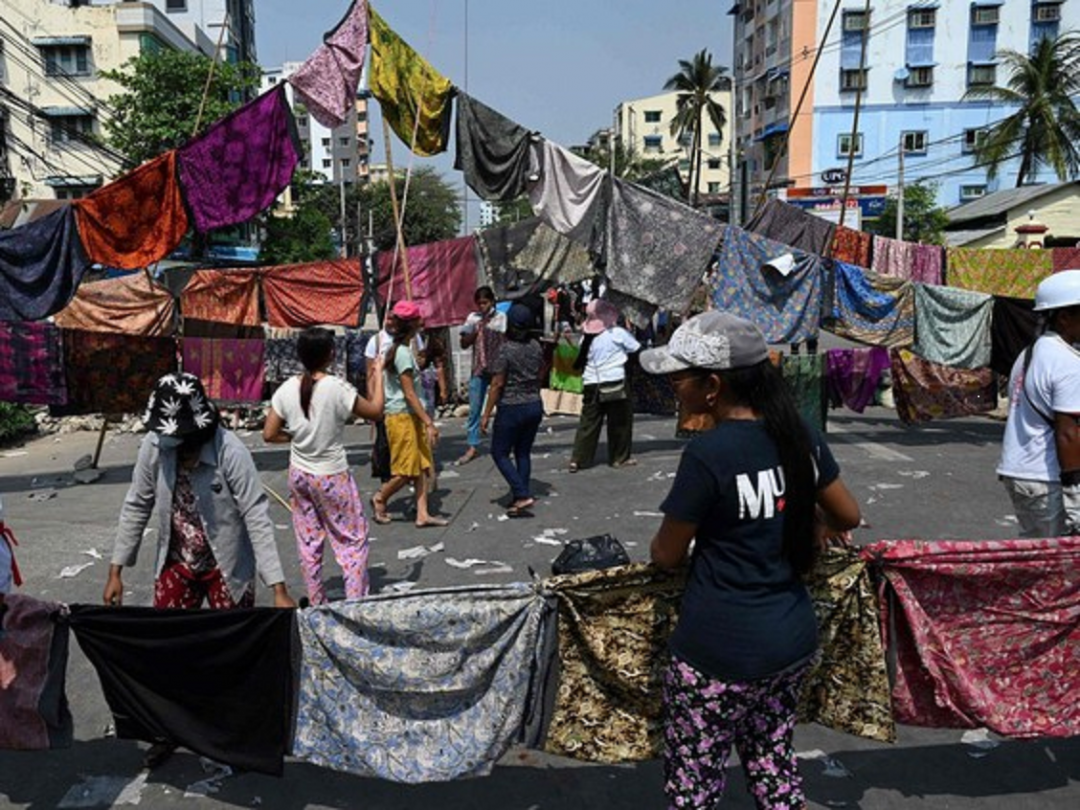 Women hang their traditional skirts, Htamein, over the streets to stop the military forces in their tracks. This creative strategy stopped soldiers in Myanmar as a well-known superstition that a man may lose their power and influence when they walk under women’s Htamein. Photo by: STR / AFP VIA GETTY IMAGES

This week’s blog contributor has asked to remain anonymous. As it will be mentioned throughout the blog, Myanmar is currently witnessing a struggle against a military regime that has continued to oppress its people while silencing anyone who dares to speak about it. The media has continued to cover protests in Myanmar and around the world. On March 20, 2021 USA Today published an article titled What’s happening in Myanmar? Military coup and protests explained visually which has since been updated to cover the number of deaths at the hands of the military. So far, there have been over 700 deaths with 82 being from last Friday April 9 in Bago, a town near Yangon. This blog will also give context and a personal reflection by the contributor. The military coup that took place on February 1st, 2021 is not a new event to the country. Instead, it is a continuation of the decades long civilian struggles towards rights, freedom, and democracy. To give a little bit of historical background, Myanmar, then Burma, gained independence in 1948. A year prior to this, our charismatic national father figure General Aung San, father of Aung San Su Kyi, who led the movement towards independence was assassinated by the de-facto Galon U Saw on July 19th, 1947. Consequently, at the time that the Colonial British left the country, there was no prominent leader to guide the nation into a stabilized governing system. Furthermore, the ethnically diverse Myanmar was a nest for a divisive ethnic armed struggle for dominance. Following these years of chaos, General Ne Win staged the nation’s first military coup in 1962. Myanmar’s economy and civil society, particularly ethnic minorities, suffered a great deal under the military due to corruption and human rights violations. In 1988, hope sparked among the people as the military junta promised to hold a multi-party general election. During this election, the National League for Democracy (NLD) won by a landslide. The results of this election, however, were rejected and condemned and the military, once again, seized absolute power of the nation. 2008, yet again, was another milestone for the Myanmar military with the drafting of a new constitution which would increase the military’s veto power, give complete control of the defense, and guarantee them 25% of the seats in the parliament. The military regime would continue to oppress Myanmar for the next 60 years until 2015 when NLD led by Aung San Su Kyi won the general election and democracy was restored to the hands of the civilian led party. Regardless, the 2008 constitution still gave the majority of the power to the military. Hence, as the head of the defense sector of the country, the military led by Senior General Min Aung Hlaing called for a state of emergency on February 1st, 2021 because of a proclaimed fraudulent election in November 2020.

Q: Being far away from home can be difficult, especially when there are things like the call to end the military regime happening. It can feel like you’re missing opportunities to stand together with your people. You and I had a conversation about feeling guilty for being away while there are important struggles happening, would you mind talking about that?

A: Yes, with being away from home, survivor’s guilt is a very real thing. Since February 1st, through social media, I have been hearing and seeing stories of each individual youth in Myanmar and their participation in the protest against the military junta. More importantly, it is merely not an exaggeration when I say every single person, because there is not one friend or cousin that I know who hasn’t gone out to protest. Young people in Myanmar go out to the streets and risk their lives everyday to fight for democracy, for the country’s future, for my future. And with that reality, I constantly feel like I am complacent, unproductive, and inactive in this movement. I see more and more people get brutally killed on the street, and I read these stories in the comfort of my air conditioned room. It is difficult to not feel guilty knowing that people are losing their lives for my future while I reside in the US with the privilege of safety and security.

Q: Feeling like you are not being productive while others are out as you say fighting for your future is real and I want to acknowledge that. I know something about that. Sometimes what we get on the news does not give a full picture of what is going on and watching from a distance can give a picture that suggests powerlessness. What is your perspective on what is happening in Myanmar? What do you hear from family and friends?

A: Just as everybody, I go through most of my days feeling hopeless and powerless as I process the brutality of the Tatmadaw. Especially as the nation has suffered generational trauma, I have seen my parents and my grandparents live through previous military dictators, it is embedded in my mindsets that no one’s power matches that of the military. However, I am pleasantly surprised when I talk to friends and family back home as they display more hopefulness. As they are living in such close proximity to the conflict and directly facing the wrath of the military, I predicted that friends and family back home would experience higher levels of grief and suffering. However, living in the middle of the conflict zone also allows them to see the small steps that are taken towards a positive change. Because of this they are also able to witness a more tangible sense of improvement and unity among the people. During a conversation with a good friend, they said, “As we live in Myanmar every night we get to release stress and anger by banging pots and pans.” It gives me a sense of relief and comfort whenever I hear the hopeful words of my friends back home.

Q: That is so powerful that the act of banging pots is also an opportunity to release some stress. One of the tactics used during the protests in Myanmar was the hanging line of skirts, do you mind talking more about what this means and why it is such a beautiful strategy specific to the context?

A: Since the beginning of the protests, I have been amazed by the creativity of the different strikes and protests led by the Myanmar youth. In addition to the Civil Disobedience Movement (CDM), where the civil servants are refusing to go to work, one of the most creative protests have been one where protestors hung Htamein (a Burmese women traditional skirt) above the streets. Myanmar is a nation with rich cultures and traditions. With this comes strong superstitions among the people. One of the well known superstitions is that when men are physically lower than women they will lose their power and influence. With this superstition, Myanmar women hung their Htameins on the streets so that soldiers will not come towards them with their fear of losing power. This tactic took the soldiers by surprise and stopped them in their tracks. The Htamein protest tactic is only one of the many innovative peaceful strategies that young people in Myanmar have organized in the past three months.

Q: We talk about protests as a way to spread awareness and for people to use their voices in various ways, and we have seen that there is sometimes violence involved. I know that there is an event in DC this weekend against military coup https://stayhappening.com/e/the-national-multi-ethnics-protest-E2ISTIOHEFJ What are some ways the international community can be involved?

A: One way to help the Burmese community is help fund the Civil Disobedience Movement. The official gofundme page by the official civilian-led organization CRPH is  https://charity.gofundme.com/o/en/campaign/crph. Currently the website is closed off for safety of the organization leaders. Another way that would be helpful to the Myanmar community is taking the initiative to learn more about the situation. Rather than relying on the Burmese community, education yourself and learning about the nation’s historical struggle towards freedom can help the international community grasp a better understanding of the situation. Lastly, one productive way of contributing to the situation is through participating in international protests that take place in their respective country. The presence of international community and international individuals displays solidarity for the Myanmar community.

Q: What is happening now?

A: For much of the first few weeks since the military coup on February 1st, the protests stayed quite peaceful. During this time, everyone comes out onto the streets chanting to regain democracy, and to build solidarity with the police and the soldiers. On the first day of the protest, people set out food and water for the security forces and chanted “Our police,” as they protested. However, as the situation escalates, the violence continues to increase all over Myanmar. As of now, the death toll is over 700, many of whom are young university and high school students. Due to the fear from the violent turn of events fewer people are on the streets protesting. Regardless, people continue to fight for the country through banging pots and pans, spreading news through social media, and participating in strikes. With only having access to state-run channels on television, people have turned to other media outlets to spread information about the current situation. Facebook has been a primary platform that people rely on to receive news. Young people in Myanmar, also, recently started an underground newsletter called Molotov to keep information moving following the internet shut down (As of now, no one has access to mobile data, and WiFi connections get cut daily from 1:00 AM to 9:00 AM). These bold actions of speaking up are not without risks. Existing Penal Code 505b criminalizes speech that supposedly causes fear or alarm in the public. With efforts to silence the people, the military has charged many individuals with violations of this law as they speak out their voices. Regardless of the risks, the desire for freedom and a prosperous future lives in the heart of the Myanmar people. As a result, they will continue to fight, for themselves and for future generations to come.

PXD conducted the interview with this week’s blog contributor.