Johnson, who at EMU started one of the few full-semester conservation photography courses offered to undergraduates in the United States, provided instruction in terrestrial and underwater macro photography during the North American Nature Photography Association (NANPA) High School Scholarship Program. The Great Smoky Mountains Institute at Tremont in Tennessee hosted the group.

In the program, 10 high school students practiced their skills while exploring the natural history of the park, which Johnson said is “one of the amphibian capitals of the world, particularly when it comes to salamander biodiversity,” he said. “It was fantastic. I had a great time.”

Submit your images to apply for a scholarship to study visual arts and digital media at EMU.

An affiliate member of the International League of Conservation Photographers, Johnson has taught at EMU since 2005. His nature photography has been featured by Orion, BBC Focus Magazine, National Geographic Kids Books, National Science Teachers Association Press books, and numerous conservation journals, among them the publications of Wild Virginia and Virginia Wilderness Committee.

This was the first time Johnson was involved in the high school program. A member of the NANPA conservation committee, he presented at the 2015 and 2017 NANPA Summits and in a July webinar titled “Just Below the Surface.”

During the week Johnson and his co-instructors were joined on various days by additional NANPA professionals and resource people, including a bear expert. The group visited natural features such as the Cades Cove area, learned about regional biodiversity and biology from researchers, and received instruction and inspiration from professional photographers.

Some of the students had already traveled the world while others were more backyard based, but what impressed Johnson about all of them was their motivation, he said: “They were really passionate about photography.”

Nature provided spontaneous opportunities to practice the craft, for example when a storm moved over the landscape with rainbows, lightning, “wild mist” and dark clouds.

“It was a sublime experience,” Johnson said.

At the conclusion of the week, students presented a photo story based on the surrounding ecosystem. [View program output from years 2017, 2016 and 2013.]

Program alumni have gone on to win numerous awards including from National Geographic and the Smithsonian and to become professional photographers for the West Virginia Department of Commerce and the Seattle Times, among other positions. 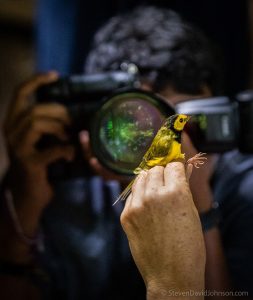 In 2017 EMU senior Macson McGuigan was one of NANPA’s 12 College Scholars. He joined other collegiate recipients in producing a film for the North Florida Land Trust.