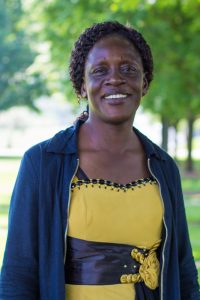 Judith Mandillah is a principal probation Officer in Kakamega County offering services at the High court of Kenya- Kakamega.

She was born on a dry, sunny Friday February in 1965 in Webuye Bungoma County, Western Kenya, where she still lives. Having a kid brother born eleven months after her, Judith seems to have internalized early independence but also a liking for children,  a characteristic she has upheld throughout her life. She finds fulfillment in caring for vulnerable community children and those she encounters through her work environment. Judith values and enjoys community village life.

Judith holds a certificate in counseling from the University of Nairobi-2002, a bachelors 2nd class honors degree from the Kampala International University, and a post-graduate certificate in Peacebuilding and leadership from Eastern Mennonite University (courtesy of USAID Kenya). In 2018, Judith earned a Master of Science in Peace and Conflict Studies from Masinde Muliro University of Science and Technology and is currently pursuing a Doctor of Philosophy in Peace and Conflict Studies. Other than her academic certificates, she has attended skill-expanding workshops and seminars including: senior management course, drug and substance abuse counselling, restorative justice and rehabilitation, conflict transformation, child protection, project proposal writing, planning, management and implementation, strategic planning, and many others.

In 2004-2005, Judith initiated an entrepreneur income generating circle banking program in Kimilili, Bungoma among women offenders serving probation sentences. From this initiative, an open day reflection and tools/financial/material offender empowering programme in collaboration with other NGOs was born in the department. The programme was adopted nationally as an activity for offenders. Following this innovation, Judith recognized that knowledge and skill empowerment would do better as a community crime prevention measure, and proposed a blue print for the establishment of a Community Probation Resource Training Center ( Offender Day Care Centre) to cater for both offenders and non-offenders in the community.  In 2006, she was selected to under-go a Trainer of Trainees course in the administration of Community Service orders (an offender sentencing programme implemented by the probation department) after an exemplary initiated environmental conservation program in Kimilili, Bungoma with offenders christened “Community Service Offender skills empowerment through tree nursery and tree planting.” The programme was adopted by the department nationally as an offender rehabilitation and skill program as well as a government expenditure savings. After this programme, Judith represented Kenya’s system through training the Rwanda government officials on the management of community service orders- “TIGIS”.

As an experienced probation officer engaged in offender rehabilitation, crime prevention, information generation to judiciary, conflict transformation, children protection, gender-based violence issues and empowerment of community members to build resilience for peace, Judith’s passion for restorative justice practice in the legal system has been unstoppable. She was appointed to serve as the secretary to the Kakamega High Court Users’ Committee, a criminal justice system stakeholder committee that superintends judiciary justice dispensation in any given jurisdiction nationally). In this position, she has been instrumental in training community members and local administrators on alternative dispute resolution mechanisms, resolving land disputes through this mechanism and working to have Kakamega Courts identified as a pilot station for the establishment of an annexed mediation court. In order to enhance advocacy and practice of restorative justice, community peace building and above all build bridges between offender and victims of crime, Judith has initiated a victim/offender conferencing circle and a trauma healing through theater among offenders in Kakamega, an initiative that is likely to be adopted by the department nationally. In the department of probation, she has been assigned the duties of an Aftercare Liaison Officer doing liaison between Kenyan Penal Institutions and Probation Offices in matters of offender community reintegration and resettlement. In 2018, she was also elected as the National Secretary General of the Kenya National Association of Probation Officers to represent the officers on welfare, professionalism and career development in the Kenya national public sector.

Judith also directs The Berryl Dream’s Rescue Homes. She is an affiliate member of the Kenya counselors Western Chapter, an accredited Kenyan legal community mediator and consultant to the Kenya Children’s Charitable Institution Network in Kakamega County, and a member of DAIMA along with several other CJP Alumni. Her volunteer work includes mentoring young persons in schools and membership on schools’ board of management teams. She is a lecturer at the Masinde Muliro University of Science and Technology since 2013, a motivational speaker and a private counselor.