Even before the long line of hungry students was admitted, Thomas Plaza at Eastern Mennonite University was bustling Friday night as 22 chef teams prepped their tables where they would serve the authentic cultural cuisine they’d prepared for the annual international food festival and competition. 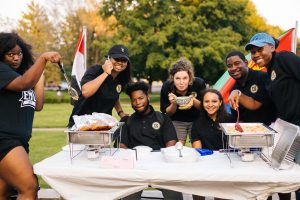 This year’s festival was the biggest yet, with approximately 350 people attending and voting for the winning teams, who were awarded cash prizes of $100 (first place) and $75 (second and third places). The event was sponsored by International Student Services and the International Student Organization (ISO), which also reimbursed chef teams for their ingredient purchases.

First place went to Leah Wenger, Sylvia Mast and Abigail Jolly for their chicken tikka masala, rice and naan; second place went to Mario Hernandez, Fred Flores-Cano and Mohammad Albaqami for their ceviche; and the Black Student Union represented by Jessica Washington and Clarissa White for their mac and cheese. 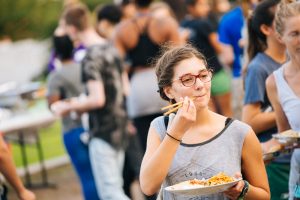 Festival organizer and ISO president Xhorxhina Ndoka has attended three years. The senior from Albania was a member of the winning team as a first-year student, when she and her Honduran partner made tres leches, which turned out delicious – she heard: “I never had the chance to taste it, actually,” she said.

But the festival is about more than food and culinary chops, Ndoka said: “This event is important because we are not only competing or doing some food tasting. We are manifesting our cultures, sharing a taste of our home countries, and bonding with one another. Breaking bread is an act of family and close friends.” 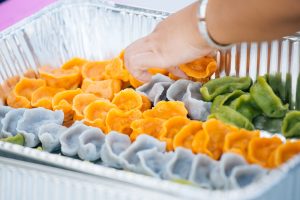 “It’s definitely gotten busier,” said senior Emma Miller, who has attended the festival each of her years at EMU. “A lot of people are aware that there are students from other cultures on campus, but they don’t really know what that means and they might not interact with them a lot. This is a great way to share culture and brings all that together so they can see firsthand what that looks like.”

Nearly every continent was represented by the chef teams. 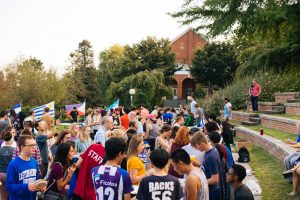 “I remember we used to have it when we were kids for Christmas, or when there was any holiday,” Val said. “They would just make a big batch of it, and everybody in our family would have it, and so we’re bringing it here and just remembering people and some of our festivities.”

Jeremiah Yoder served fried plantains, like those he had growing up in Burkina Faso.

“It’s not really a meal,” he said. “It’s more of an add-on, something that will go with almost every meal, especially if there is a lot of people partaking in it.”

Professor Marti Eads’ husband Christopher was manning the table of three-ingredient peanut butter cookies that she and their daughter Effie had made, to represent the United States. 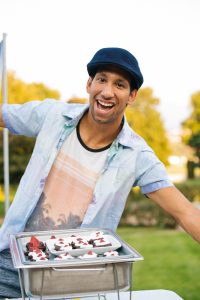 Senior Allene Henderson was serving an Australian dessert that she said in her home country Chile is called merengue torta: meringue, cream and strawberries – “very simple, but very hard to make,” she said.

There were laugenbrezel – a soft lye pretzel – and Bavarian sauerkraut from Germany made by Victoria Barnes, Chinese dumplings with green onion pancakes and sour and spicy shredded potatoes, lumpiang shanghai spring rolls and more.

And that winning mac and cheese? White describes it as “one of my soul food dishes I was taught to make when I was younger and I just stuck with it. Since I was able to walk, I’ve been in the kitchen just learning.” 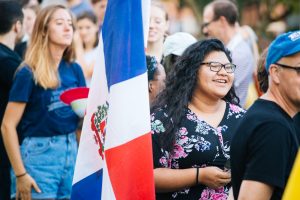 First-year student Jonathan Reimer-Berg said he found himself gravitating toward the Latin American food, perhaps due to being enrolled growing up in a dual-language program; on his plate were arroz con leche, tamales and one of the 90 empanadas made by Glorianne Flores Mojica and Rachel Loyer that were gone within 30 minutes of the festival’s start.

Not far from where David Park and Jae Hyun Cho were serving South Korean noodles – in rapidly disappearing both spicy and sweet dishes – Gabby McMillon had made a brittle rendition of an almond and maple syrup treat she often buys at a Korean bakery in northern Virginia. 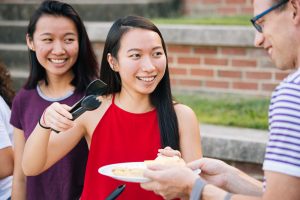 The festival is “really valuable,” she said, because it allows people to experience different cultures and to try food they don’t normally eat, plus learn new ways of preparing common foods.

“Considering the fun and the reviews we have received so far,” Ndoka said following the event, “we will upgrade this annual event into something bigger next year. What’s more encouraging than seeing Americans cook Indian food and international students engage and bond with one another?”