A new symbol of nonviolence is the latest artistic addition to the Eastern Mennonite University (EMU) campus. “Guns Into Plowshares,” a 16-foot-tall, 4-ton sculpture depicting a plow covered with more than 3,000 handguns collected from the Washington D.C. streets, was dedicated in an afternoon ceremony Oct. 10. Artist Esther Augsburger, her husband President Emeritus Myron Augsburger and other members of the EMU community were present.

The sculpture’s title references Isaiah 2:4: “They shall beat their swords into plowshares and their spears into pruning hooks.”

In his welcome, Daryl Byler, executive director of the Center for Justice and Peacebuilding, noted that he was at the first dedication ceremony 20 years ago in Washington D.C. at Judiciary Square.

“Columbine, Virginia Tech, Sandy Hook and Las Vegas, just last week, are only a few of the horrific shootings that have violently interrupted the past two decades,” he said. “In the culture of gun violence, Esther Augsburger and her son Michael, along with the biblical prophets of old, dared to imagine a day when, rather than destroying enemies with guns and weapons of war, humans would find the God-given strength and courage to feed their enemies with the produce tilled and grown in our fields.”

Read a column by the Washington Post’s John Kelly on ‘Guns Into Plowshares.’

Scroll down to view an album of photos from the sculpture’s arrival on campus.

The sculpture was originally located on D Street NW, outside the D.C. police department headquarters. After renovations in the area in 2008, it was moved to the department’s evidence control facility near Blue Plains and more recently, sat in a vacant lot nearby.

The sculpture will be at EMU for two to three years before returning to Washington D.C. “Eventually having the artwork return to MPD Headquarters would allow it to serve as an important visual reminder that while we have made great strides, we remain committed to removing illegal firearms from our neighborhoods and further reducing violent crime,” police spokeswoman Aquita Brown wrote in an email to the Washington Post.

“The message of this sculpture is to cultivate love,” said Esther Augsburger at the dedication ceremony. “In this sculpture, we turned instruments of death into a symbol which cultivates life. We are turning pain into art so we can bear it.”

Augsburger created the sculpture with her son, Michael, who came up with the idea after hearing about the success of boxer Riddick Bowe’s buyback program in 1994. Bowe donated $100 per gun, and the D.C. police department collected more than 6,000 over two weekends. After the police department announced that the guns would be melted into fence posts, Michael had a different idea.

“That shouldn’t happen,” he told his mother. “They should be made into a sculpture of the peace that happens when we lay down our weapons.”

A plaque in remembrance of Michael was also dedicated at the ceremony. A 1980 graduate who owned his own construction company and had lived in Indonesia and Haiti, he died in April 2017.

Esther Augsburger was the first student to graduate with an art degree from then Eastern Mennonite College. She went on to earn a master’s degree in art with a concentration in sculpture from James Madison University. Her sculpture “Love Essence,” depicting the themes surrounding the simple gesture of foot-washing, stands near the seminary.

The massive sculpture’s journey from Washington D.C. to Harrisonburg, and its eventual refurbishment, was the result of many helping hands. Lisa Schirch was a tireless advocate for its removal, Augsburger said, “even though she has yet to see it.”

Doris and Phillip Bumbaugh donated the site for the duration of the exhibit; they own the property on College Avenue where the sculpture rests. Jonathan Kreider, of Kreider’s Machine Shop in Harrisonburg, reprised his original role with construction assistance in 1995 and donated time towards the recent restoration. Karl Stoltzfus, of Dynamic Aviation, provided transportation in 1996 and again in 2017. His Bridgewater-based business also recently housed the sculpture. Keith Morris provided sand blasting and repainting, while Larry Martin provided some finishing welds to replace missing guns. Ed Lehman and the facilities management team, as well as the advancement division, also contributed time and resources to the project. 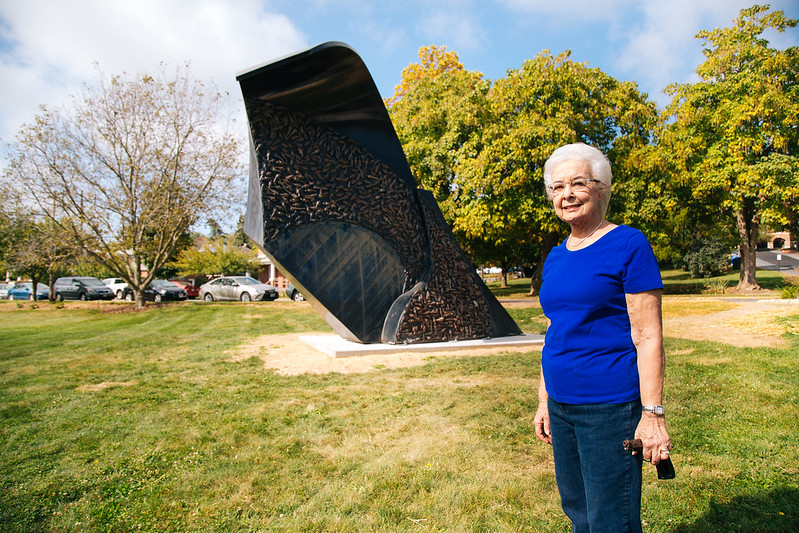