Five days of celebration from April 3-8 kicked off the ninth chapter in the life of Eastern Mennonite University, as the community welcomed new president Dr. Susan Schultz Huxman.

In a time of celebrating firsts — Huxman is the university’s first woman president and the first to come from west of the Mississippi, among other notable claims — the week included many time-honored traditions: a hymn sing, chapel service, scholarly gatherings, a special dinner and brunch, as well as community service with Harrisonburg City’s annual Black’s Run Clean-up.

View the photo album of the week’s events below.

The LovEMU fundraiser effectively kicked off the week, raising $106,500 from 692 gifts and capping an extraordinary day that highlighted the “love” many feel for this 100-year-old institution.

Performances by the revitalized jazz band, a rousing run of the Hitchcock spoof “The 39 Steps,” and talks by Centennial historian Donald Kraybill ’67 were also scheduled during the week.

Watch “Hux and Herm Go to the Gala.”

More than 500 people attended Friday’s inauguration ceremony and many of them attended the student-planned inaugural gala that evening, during which guests came dressed to the nines. (“I didn’t even recognize you,” was a commonly heard phrase.) Yoder Arena was transformed into a swanky, dimly lit space with festively decorated tables, an array of food and beverages, a live band, dance floor and lounge area.

Past presidents and EMU history were memorialized with banners containing important events during each person’s tenure. (Appropriately Dr. Huxman’s banner was blank.)

Huxman and the EMU mascot, Herm, were featured in an entertaining video about the making of a time capsule, created by seniors Eli Wenger and Macson McGuigan. The duo toured campus, collecting items from various programs and departments. Herm is alternately hungry and distracted, and Huxman must keep him on task to get the job done.

A second video highlighted the hopes of EMU students, faculty and staff for EMU’s future.

“I was very pleased with how the Gala went,” said sophomore Nicole Litwiller, a member of the planning committee. “Matt Ruth did a great job hosting, the food was great, and I enjoyed the music! I also appreciated how students were able to interact with faculty and staff members in an informal way. I enjoyed chatting with Susan for a bit as well.” 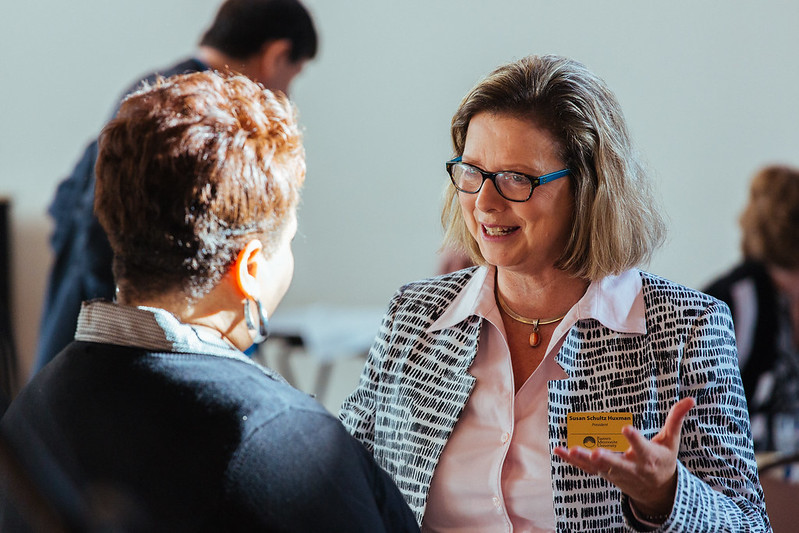